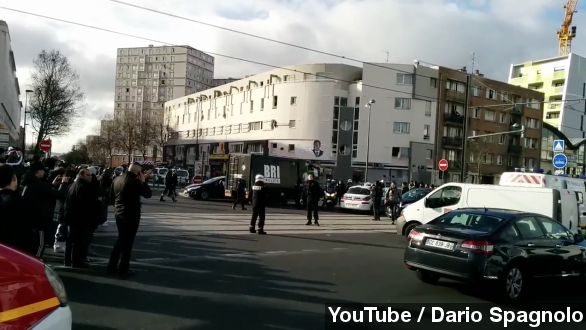 SMS
French Police Say Hostage Case Friday Not Terror-Related
By Cliff Judy
By Cliff Judy
January 16, 2015
Police in France responded to yet another hostage situation Friday in a suburb outside Paris, though police say it doesn't appear terror-related.
SHOW TRANSCRIPT

Police in France dealt with yet another hostage situation mid-day Friday as a man took at least two people hostage at a post office near Paris.

This is video of the police response from a man who wrote on social media he lives near the scene. The man wrote on Twitter of a large police response with helicopters overhead in Colombes, a suburb northwest of Paris. (Video via YouTube / Dario Spagnolo)

BFMTV reported police told French media outlets early on the situation was "not of a terrorist nature" and the man was "known to police as a common criminal and had himself contacted the police."

After less than two hours, however, France's Interior Minister confirmed the man turned himself in and released the hostages unharmed.

The hostage situation broke just as U.S. Secretary of State John Kerry gave a speech in Paris pledging American support in the wake of last week's terror attacks on Charlie Hebdo magazine and the violence that followed. (Video via CNN)

After police arrested the suspect, the man who lived near the scene sent out this tweet. Translated, it reads, "It seems that the alert is lifted. All's well that ends well."

The hostage situation comes not only at a time of incredible tension in France, it happened the day after overnight anti-terror raids in Belgium, Germany and France.