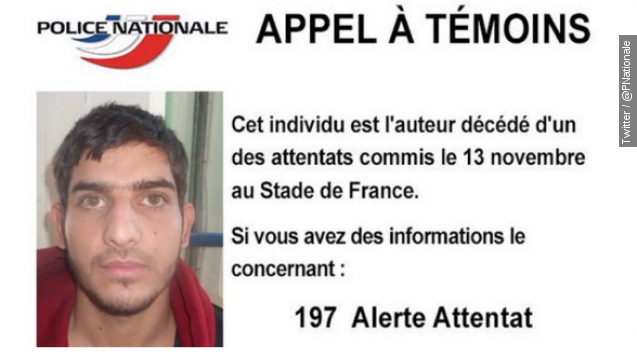 SMS
French Police Release Photo Of Suspected Paris Bomber
By Katie Link
By Katie Link
November 17, 2015
The photo comes from a passport that was found near one of the sites of a suicide bombing in Paris.
SHOW TRANSCRIPT

French authorities are asking the public for help in identifying this man, who they believe to be one of the suicide bombers who attacked the Stade de France in Paris Friday night.

That photo was first found on a Syrian passport near the body of one of the bombers; authorities initially said that passport was issued to a refugee in Greece who applied for asylum in Serbia.

But now that passport appears to be a fake. Officials in Serbia arrested a man Tuesday after he was found carrying a passport almost identical to the one found near the bombings. The only difference between this passport and the one recovered Friday night is the photograph.

The name on both passports reads Ahmad Almohammad. According to The Guardian, officials think both passports are fake and were acquired near the border of Syria and Turkey.

Police are also still searching for this man who they suspect was involved in the attacks, as well as another unidentified fugitive.

This video includes images from Getty Images and music by Chris Zabriskie / CC BY 3.0