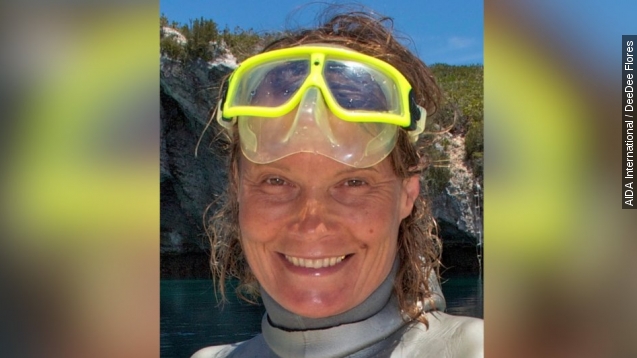 SMS
Free-Diver Presumed Dead After Going Missing Near Spain
By Matt Moreno
By Matt Moreno
August 5, 2015
Natalia Molchanova, one of the world's greatest free-divers, never resurfaced after reaching depths of 30 to 40 meters off the coast of Spain.
SHOW TRANSCRIPT

One of the world's greatest free-divers is missing off the eastern coast of Spain after she descended and never resurfaced.

Natalia Molchanova never came back up Sunday after diving without fins to a depth of 30 to 40 meters. That's fairly shallow for Molchanova, who can dive more than 100 meters when she uses fins. (Video via The Underwater Channel)

Days after her descent, there's still no sign of her. Rescuers have called off search efforts.

Her son, also a free-diver, told The New York Times: "It seems she'll stay in the sea. I think she would like that."

Free-divers are different from other divers because they don't use any special scuba gear to go deep underwater— they just take a big breath. (Video via YouTube / Pure Apnea)

Molchanova wore weights when she was diving near the Balearic Islands — typical for a free-diver trying to swim down deep. Because of that, officials say her body might never be recovered.

The 52-year-old holds 41 world records and is a 23-time free-diving world champion. She has two children.