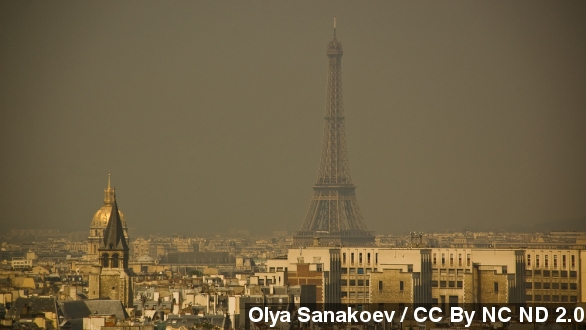 SMS
France Taking Extreme Anti-Car Measures To Combat Paris Smog
By Ben Lawson
By Ben Lawson
March 22, 2015
The smog in Paris has grown so thick that officials have banned half of all cars from driving in an effort to cut pollution.
SHOW TRANSCRIPT

After the Paris smog grew so thick it started to block out the view of the Eiffel Tower, officials have banned half of all vehicles from driving on Monday.

Only cars with even-numbered license plates, at least three passengers and electric or hybrid vehicles will be allowed to drive in the city. Several forms of public transport are also available for free and earlier this week officials lowered the speed limit to 12 miles per hour to discourage people from driving.

That agency ruled the concentration of PM-10 particles, or those levels of 10 microns or less, was well above safe levels. The particles can lodge deep inside a person's lungs, causing breathing problems for people with asthma.

Paris had to put the same restrictions in place this time last year. The BBC reports officials said the lower traffic levels coupled with more favorable weather conditions did manage to reduce the smog in the city. (Video via BFMTV)

However, Quartz reports that pollution particles only fell by 6 percent following the ban.

The problem is not just limited to Paris as winds have swept the smog to the U.K. and other parts of Western Europe, as well.