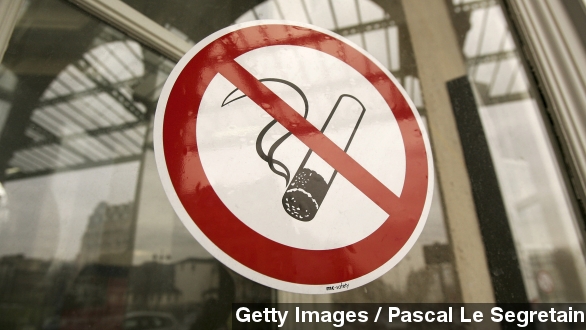 By Jasmine Bailey
September 26, 2014
According to French health officials, some 73,000 people in the country die every year from smoking cigarettes.
SHOW TRANSCRIPT

According to French health officials, some 73,000 people in the country die every year from smoking cigarettes — the country's No. 1 cause of death.

But in an effort to combat what officials believe is a growing epidemic, especially among teenagers, the government has announced new proposals for packaging regulations.

The announcement was made Thursday by French Health Minister Marisol Touraine. She explained all packaging will be neutral — same size, shape and color — in an effort to "take away the attractiveness of the packaging."

BBC: "The new packs will look something like this. ... France has often been seen as a paradise for smokers due in part to a vibrant cafe culture."

According to the World Health Organization, France has one of the highest rates of smoking in Europe  — with 31 percent of the adult population dealing with the addiction.

Once the regulation makes it through the national assembly, it will be illegal to smoke in public parks or in cars with children under 12 years old.

But it's a controversial move coming about a year and a half after Australia implemented a similar regulation in 2012 — which has gotten mixed reviews.

In Australia, cigarette packages are a plain olive color; France will still allow brand names to be shown in a standardized font.

SKY NEWS: "Everything in Australia so far have shown that plain packaging is really positive. ... The Tobacco Manufacturers' Association here in the U.K. claim that previous studies have found the opposite."

But The Wall Street Journal notes, "Antitobacco groups, for their part, have pointed to a study in the Medical Journal of Australia, which reported a 78% increase in the number of calls to Quitline, a smoking-cessation helpline, in the weeks following the introduction of plain packaging."

However, the president of the French National Committee Against Smoking told French public radio RFI it's hard to compare Australia's program results with French smokers.

"The number of people who smoke in Australia dropped by bit more than 3% over last year. But you have to compare what can be compared and right now in France you have 30% of young children between 15 and 17 who smoke while in Australia it's below 15%."

However, France 24 reports this past May the French Office for Tobacco Prevention came out with a report admitting little is known about the risk of electronic cigarettes. The study's author wrote, "Right now, we don't know enough about the products [in e-cigarettes] ... [but] to our knowledge, appropriately made and used, it presents infinitely fewer dangers than [regular] cigarettes."

But still, France's new regulation would make it against the law to smoke e-cigarettes or vaporizers in public places like schools, public transportation and inside office buildings.

No timeline has been set on when the French government will begin implementing the changes.