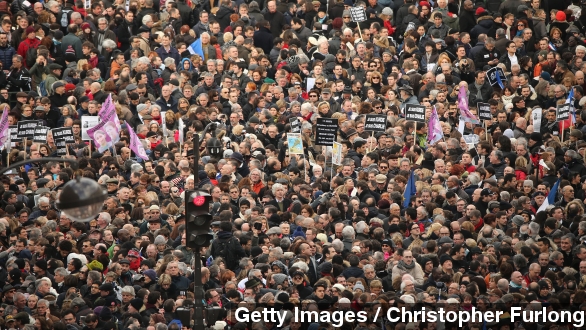 Hundreds of thousands of people poured into the streets of Paris Sunday, as France rallied to commemorate those killed in the past week's terrorist attacks.

The crowds sang the French national anthem and chanted that they were not afraid, while world leaders convened at the Elysee Palace to meet with French President Francois Hollande. Before the gathering, multiple media outlets reported more than one million people were expected to attend. (Video via RT)

There have been frequent rallies like the one on Sunday since the attacks took place, including marches of more than 700,000 people across France the day before, but Sunday's was expected to be the biggest. (Video via BBC)

Some in France have compared the impact of the attacks on the country to the September 11th attacks on the U.S., and some of the demonstrators say the aim of the rallies is to show the French people aren't afraid.

Michael Kay told MSNBC, "The way that tens of thousands of people came out on the streets of France afterwards is an act of defiance. It's a message to say, 'we're not going to be affected by this, and we're all rallying together,' I think that's important."

But the rallies also bring a logistical challenge for French authorities. With security already tightened after the attack, thousands of police officers were on the streets Sunday as well, which French officials said was an effort to protect demonstrators. (Video via BFMTV)

Security personnel were also deployed to Jewish institutions in the country, as the attack on Friday targeted a Jewish grocery store.

A writer for Haaretz argues the attacks this past week have only served to increase fear among the Jewish community in France, many members of which had already started to leave the country for Israel. She cites, "The 7,000 French Jews who uprooted their lives and moved to Israel in 2014 — more than double the number who came the previous year."

Still, the rally Sunday had a message of unity in the face of sectarian attacks as French Prime Minister Manuel Valls explained. (Video via Arirang)

"Each citizen must come with only one idea in their head: unity with the values of the republic, of tolerance, to fight against racism and anti-semitism," Valls said.