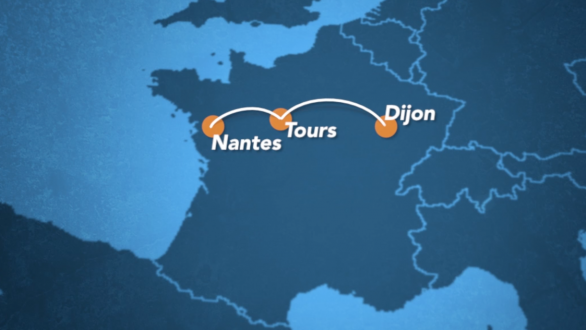 A man in Nantes, France, drove a van into an open-air Christmas market on Monday night, injuring some 10 people.

The attack is particularly notable for a couple reasons: First, it was the third high-profile violent attack the country has seen in three days. (Video via BFM-TV)

On Saturday, a Burundi-born French national stabbed three police officers in a suburb of Tours before police shot him to death. (Video via TF1)

Then, on Sunday night, a man drove a car into five different groups of people in Dijon, injuring 11 people in all. (Video via France 24)

And finally, Monday's attack in Nantes. The common thread between the three? All of the assailants shouted the Arabic phrase "Allahu Akbar" — known as the Takbir — and that's prompted fears of ISIS indoctrination.

The attacker in Tours was known to be a convert to Islam, and authorities were aware of his brother who had reportedly at one point planned to go to Syria.

In the Dijon attack, though, officials were quick to say the attack wasn't politically motivated and said the driver had suffered from mental illness and spent time in psychiatric care. (Video via Itele)

The same goes for Nantes, where the driver reportedly started stabbing himself after driving into the market, and according to the BBC officials said he seemed "unbalanced." (Video via YouTube / Lucie Beaupérin)

Despite urging calm, Prime Minister Manuel Valls announced Tuesday as many as 300 soldiers would be deployed to highly trafficked public areas for the rest of the holiday period, and President Francois Hollande called a special cabinet meeting. (Video via Europe 1, France 3 Centre)

The BBC's Hugh Schofield explained, "That does suggest, and quite rightly, that this is something which does need to be taken very seriously, even at the very least there does appear to be a kind of copycat thing going on here."

There is a precedent for mentally unstable so-called "lone wolf" attackers being tied to ISIS propaganda.

Man Haron Monis, the man behind the Sydney cafe siege that left Monis and two others dead, had a history of mental illness, and authorities say Michael Zehaf-Bibeau, the perpetrator of the Parliament Hill attack in Canada, was also mentally unstable. (Video via CCTV, CBC)

In all, the three attacks in France have left 24 people injured.