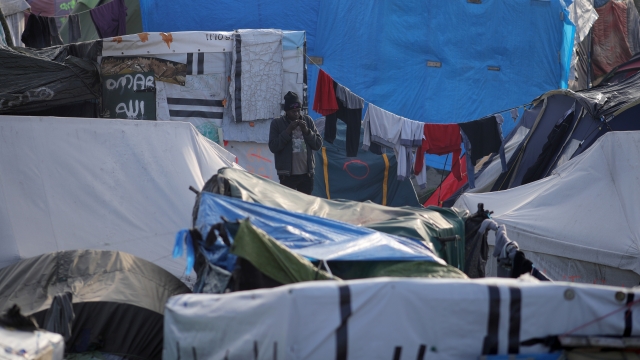 SMS
France Is Shutting Down The 'Jungle' Migrant Camp Once And For All
By Briana Koeneman
By Briana Koeneman
October 24, 2016
On Monday, French authorities started evicting the thousands of refugees who call the camp home.
SHOW TRANSCRIPT

After months of planning, France has taken the first steps to shut down the "Jungle" migrant camp in Calais.

On Monday, French authorities began processing the thousands of refugees who call the camp home.

From there, they will be transported by bus to reception centers around the country where they can apply for asylum.

Sixty buses carrying 50 refugees each were scheduled to leave the Jungle on Monday. Another 45 buses will arrive Tuesday, and 40 more are expected to pick up the remaining migrants Wednesday.

And officials aren't wasting any time getting the demolition started. Local media report the camp will be leveled in a weeklong operation starting Tuesday.

French authorities tore down part of the Jungle back in March.

More than 1,000 French police officers have been carefully monitoring the operation since it began. Clashes erupted just hours before the evacuation was scheduled to begin.

Between 6,000 and 8,000 migrants have set up tents in the Jungle during the past 18 months. Refugees from all over the world have flocked to the camp in the hopes of crossing over into the U.K. by jumping onto unsuspecting trucks heading into the country.