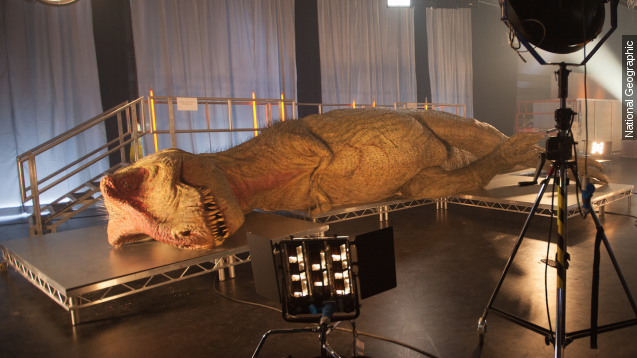 Steve Brusatte, a paleontologist who consulted for and appears on the show, had similar concerns ahead of the project.

"You see these reality shows sometimes now, 'Finding Bigfoot' and mermaid autopsy and all this kind of nonsense," Brusatte said. (Video via Animal Planet)

"I did have a bit of a fear that it was going to be something like that, but then when I talked to them on the phone they made clear very quickly that no, this was something for National Geographic Channel. ... The science behind it is rock-solid," he continued.

And a lot of science went into recreating the 42-foot-long T. rex model used in the show, which starts Sunday night.

Brusatte said: "It was insisted that the science be right. ... It took a lot of time and a lot of scientific expertise and also a lot of great artistry from the people at Crawley Creatures."

Crawley Creatures is a British production company that's worked on other dinosaur-centric projects, such as "Walking with Dinosaurs." It spent 12,000 man-hours making the autopsy model.

While some aspects of the model were well-known to science ... (Video via The Florida Museum of Natural History)

"We know a lot about how it fed from its skull, the teeth it had. ... We even know a lot about its senses by CAT-scanning skulls, looking inside the brain cavity," Brusatte explained. (Video via Witmer Lab at Ohio University)

... others had to be extrapolated.

Brusatte said: "What we did in those cases where we didn't have direct fossil information is we looked at the closest living relatives of dinosaurs. We looked at crocodiles, their close cousins, and we looked at birds, which are the descendants of dinosaurs." (Video via BBC, YouTube / Andrew Reago)

"We made a heart that was basically based on croc and bird hearts," he explained.

Ideally, the spectacle serves to draw people into the science. (Video via BBC)

"Maybe don't tell the kids it's educational; tell them it'll be blood and guts and dinosaurs, but they're going to learn a whole lot," Brusatte said.

And for what it's worth, Brusatte said he took something away from the show as well.

"It just made me see T. rex in a different light. ... Now, my mental image of T. rex is not a skeleton anymore. That's what I used to think when I heard T. rex, but when I hear the words T. rex now, I think of this incredible model," he said.