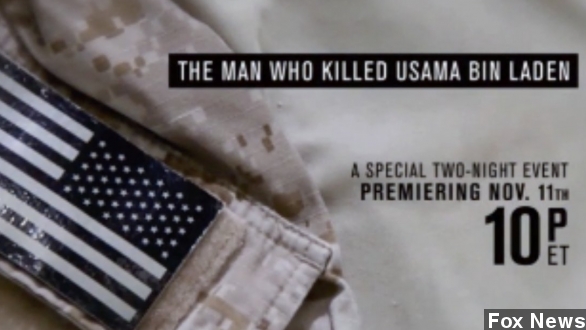 SMS
Fox's Talk With SEAL Who Shot Bin Laden Is Hardly Exclusive
By Matt Moreno
By Matt Moreno
November 11, 2014
It's been widely reported for a week now that Robert James O’Neill is the SEAL who supposedly shot and killed Osama bin Laden.
SHOW TRANSCRIPT

By now it's not much of a secret.

Which likely took the wind out of the sails of those at Fox News.

Reports of O'Neill being the man first surfaced on website SOFREP on Nov. 3. The site specializes in "special operations" news.

That article cites a February 2013 Esquire story that only calls the man "the shooter." SOFREP says this man is O'Neill. Still, the report from SOFREP circulated to a few media outlets but didn't exactly go widespread since the website is a relative unknown to mainstream readers.

Then, the Daily Mail posted a piece claiming that O'Neill’s father confirmed it to the outlet — six days before Fox News' first segment was set to air.

The Washington Post followed that up the next day with a piece of its own, including an interview with Robert O'Neill.

That same day, Fox News and reporter Peter Doocy walked back their "exclusive interview" statements … but just a bit.

"Since we started promoting our broadcast, people have published a lot about the story — some of it right, some full of misinformation."

"We are the only ones that he sat down with on camera."

Two days after, CNN, too, had an O'Neill exclusive — airing audio of O'Neill speaking to a freelance journalist.

In an interview with Capital New York, Doocy says even Fox News tried to keep things quiet within the company, codenaming the project “Gatewood” — after the 1880s army lieutenant who got Apache chief Geronimo to surrender.

VIA SLATE: “It was the codename used for the operation by Navy SEAL Team 6.  … After killing Bin Laden in a firefight, the SEAL team radioed back ‘Geronimo E-KIA’ —  ‘E’ for enemy, ‘KIA’ for Kill in Action.”

Now, how all these outlets beat Fox News to the name reveal, posting their interviews and more — remains to be seen. Still, the Navy isn’t happy about O’Neill going public.

Other special ops forces have reportedly contradicted his claim, some saying his story is completely off, and some saying he should’ve remained silent.

VIA CBS: “O’Neill is not the only one to give a first hand account. A fellow SEAL published a book about the raid under the pseudonym Mark Owen and gave his first interview to Scott Pelley in September 2012 for ‘60 Minutes’.”

The Navy Seals posted a memo Oct. 31st reading, “Any real credit to be rendered is about the incredible focus, commitment, and teamwork of this diverse network and the years of hard work undertaken with little individual public credit.”