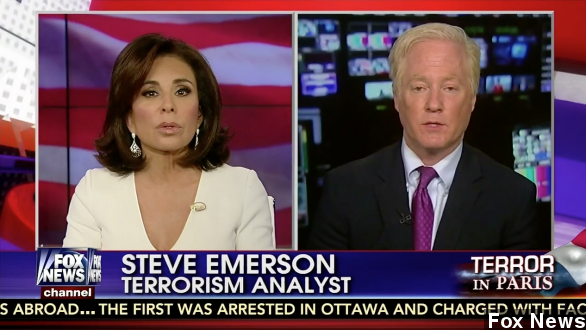 Fox News anchors spent Saturday apologizing for the network's inaccuracies when reporting on so-called "no-go zones" in the aftermath of terrorist attacks in Paris.

Jeanine Pirro said, "We could find no credible source that indicates Birmingham is a so-called 'no-go zone.'"
Finally, Julie Banderas said, "To be clear, there is no formal designation of these zones in either country ... There are certainly areas of high crime in Europe as there are in the United States and other countries."

The segment that attracted the most attention was one in which Steve Emerson, the founder of the Investigative Project on Terrorism, talked to Jeanine Pirro.

"In Britain, it's not just no-go zones, there are actual cities like Birmingham that are totally muslim, where non-muslims just don't go in," Emerson said.

A little more than 20 percent of Birmingham, the second-biggest city in England, identified as Muslim in 2011, according to the UK census. (Video via Youtube / Moss Travel TV)

"I thought it must be April Fools' Day, this guy is clearly a complete idiot," Cameron told ITV.

But that was hardly the only time throughout the week the no-go zones were brought up on the network.

Anchors called on a retired naval captain, as well as multiple correspondents in France to talk about the no-go zones and Europe's Muslim population, with Fox and Friends' Brian Kilmeade asserting, "Nobody gets jobs, they don't wanna be French, they just want to live in Europe and take over the country."

As late as Wednesday, Fox News aired this map of Paris, with the supposed no-go zones highlighted, a map which quickly became the target of French satire.

Canal+'s Le Petit Journal sent correspondents to each of the areas highlighted on the Fox News map and asked residents if their neighborhoods resembled Iraq or Afghanistan, as Fox's pundits suggested. (Video via Canal+)

An interviewer asks, "How would you characterize this neighborhood?"

The interviewee responds, "It's an inexpensive neighborhood, it's nice. That's all really, I do my shopping here."

What's not entirely clear is why Fox waited a week to apologize.

Emerson apologized earlier in the week, and a petition on Change.org, as well as Le Petit Journal's own letter-writing campaign have been active for days.

For the record, the network did not apologize for claiming the zones exist, only admitting that Birmingham, and parts of Paris shouldn't have been labeled under "no-go," and that these zones are not formally recognized.