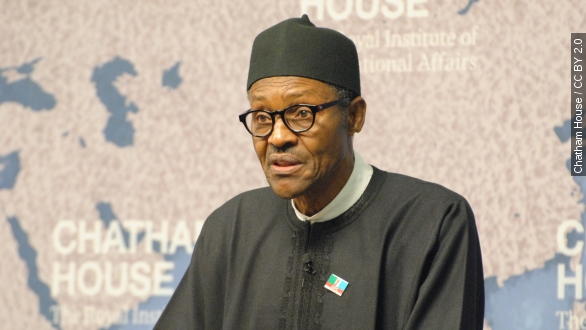 Nigeria has a new president-elect. (Video via Voice of America)

Buhari took leadership of the country after a military coup in 1983 ousted a democratically elected president. He led until 1985, has since described himself as a "converted democrat" and has run for president in all four presidential elections since 2003. (Video via Al Jazeera)

In Nigeria's largely Muslim north, the vote predictably went in large part to Buhari, a Muslim northerner himself. (Video via 2015 Buhari/Osinbajo Campaign)

By Monday night, it appeared Buhari had the lead, but the Independent National Electoral Commission suspended the announcement of results until Tuesday morning.

The elections haven't been without violence. Bombings and shootings in the country's north killed dozens over the weekend. (Video via Sky News)

There's been controversy over some of the results, too — especially in southern Rivers state, where the votes were counted despite reports of irregularities. (Video via Channels TV)

Members of Jonathan's People's Democratic Party called for several states' votes to be canceled, alleging the votes have been compromised by underage voters.

The violence that the country has seen in the lead-up to the election — which President Jonathan cited as reason to delay the vote by more than a month — has been substantial.

Boko Haram militants have killed thousands of people in the country's north in continued attacks over the past months, which some analysts say has pushed voters towards Buhari.

During the delay he imposed, President Jonathan has tried to push back against Boko Haram, launching an offensive against the group's northern base of operations, even hiring mercenaries. (Video via Bloomberg TV Africa)

Both candidates have pledged to respect the vote's outcome, and Nigeria won't want a repeat of the violence that followed the 2011 presidential elections, when fighting left more than 800 people dead. (Video via Channels TV, France 24)