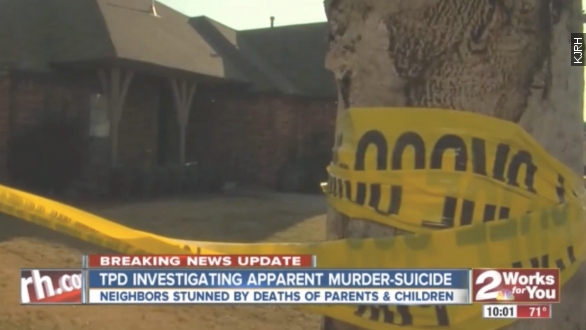 SMS
Four Dead After Apparent Murder-Suicide In Oklahoma
By Jay Strubberg
By Jay Strubberg
April 2, 2015
Oklahoma officials suspect a 42-year-old man killed his wife and two boys, both under the age of 10, before turning the weapon on himself.
SHOW TRANSCRIPT

According to our partners at KJRH, a family of four was found dead in a Tulsa home Wednesday afternoon in what police believe was the result of a murder-suicide; officials say a 42-year-old man killed his wife and two boys, both under the age of 10, before turning the weapon on himself. Their names were not released.

"Based on the physical evidence inside the house ... homicide detectives believe that the adult male, because of the proximity of the firearm to his body, is the person who shot and killed the other individuals," Capt. Matt McCord of the Tulsa Police Department said.

According to the Tulsa World, authorities say all the victims died of gunshot wounds, and the bodies were discovered in separate rooms around the house. One officer said the killings may have occurred as much as two days ago.

The woman reportedly hadn't gone to work or asked off for the last two days, which prompted her employer to ask police to go check on her. That's when police found the bodies.

Neighbors described the area as peaceful and quiet and say they never thought something like this would happen.

Homicide detectives have launched an investigation, and a motive is unclear at this time.