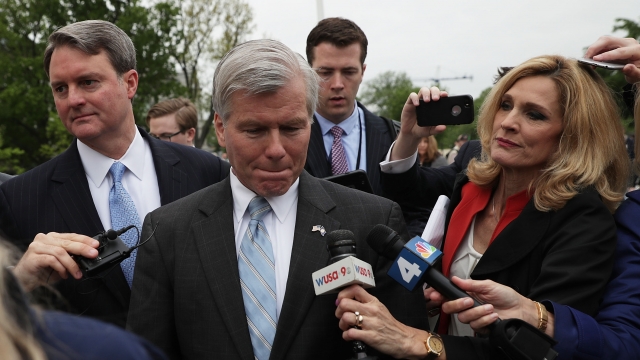 By Lauren Stephenson
June 27, 2016
Former Virginia Gov. Bob McDonnell and his wife were convicted of public corruption in 2014.
SHOW TRANSCRIPT

A former Virginia governor won't be heading to prison — at least for the time being.

The U.S. Supreme Court, in a unanimous decision Monday, ruled in Bob McDonnell's favor. McDonnell and his wife, Maureen, were each convicted of multiple counts of corruption in 2014. The couple accepted $175,000 in loans and gifts from a Virginia businessman. Prosecutors argued the gifts were in exchange for "official acts."

The focus of the case was on the definition of an "official act." McDonnell's attorneys wanted the district court judge to add to the jury's instructions that "merely arranging a meeting, attending an event, hosting a reception, or making a speech are not, standing alone, 'official acts.'" But the judge didn't agree.

However, the U.S. Supreme Court called prosecutor's instructions regarding an "official act" "overly inclusive." So, it ruled the jury instructions were flawed and could have led to a conviction "for conduct that is not unlawful."

Maureen McDonnell, who was sentenced to a year and a day in prison, is appealing her conviction, but it was put on hold until the Supreme Court made its decision. According to The Washington Post, her lawyers expect her conviction to also be vacated, given the court's opinion.

Bob McDonnell, who faced two years in prison, could be retried. However, the court's ruling makes it more difficult to not only try him but also other public corruption cases.

This video includes clips from Fox News, WAVY and CBS and images from Getty Images.