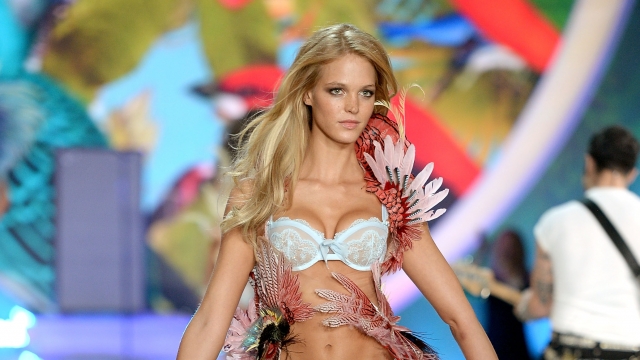 SMS
Former Victoria's Secret Model Says She Was Pressured To Lose Weight
By Katherine Biek
By Katherine Biek
April 7, 2016
Erin Heatherton says the lingerie brand told her to lose weight prior to walking in two of its fashion shows.
SHOW TRANSCRIPT

Victoria's Secret models are considered some of the most glamorous women in the world, but a former Angel has revealed she still struggled with body image issues while working for the lingerie brand.

Erin Heatherton, who modeled for Victoria's Secret for five years, told Time's Motto website she was ordered to shed some pounds prior to walking in two of the company's runway shows.

Heatherton said she was exercising twice a day before her final runway show in 2013, but she wasn't losing any weight.

"And I got to a point where one night I got home from a workout and I remember staring at my food and thinking maybe I should just not eat," Heatherton told Motto.

Models being told to lose weight is not an uncommon thing in the fashion industry. Just last year, Cara Delevingne told The Wall Street Journal she was pressured to look a certain way.

But there seems to be a growing trend toward magazines and fashion brands embracing models with curvier body types.

Sports Illustrated featured Ashley Graham, who is a plus-size model, on the cover of its swimsuit issue this year.

As for Heatherton, she stopped working for Victoria's Secret in 2013 but still continues to model and is using social media as a platform to discuss her struggle.

She recently posted a photo to Instagram with the caption, "I am not perfect. Through this struggle, however, I found the strength to love myself."

This video includes clips from Victoria's Secret, CBS and NBC, and images from Getty Images.