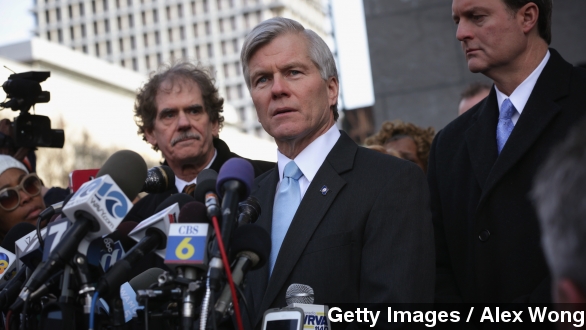 SMS
Former Va. Gov. Gets Light Sentence For Corruption Charges
By Christian Bryant
By Christian Bryant
January 6, 2015
A federal judge sentenced Bob McDonnell to two years in prison Tuesday, although he faced decades behind bars at the outset of the trial.
SHOW TRANSCRIPT

A federal judge sentenced former Virginia Governor Bob McDonnell to two years in prison after a jury convicted him and his wife of using the governor's office to help promote a friend's business — but his sentence isn't as long as prosecutors had hoped.

"I'm a fallen human being. I made mistakes in my life. I always try to put the best interests of the people first as governor, but I have failed at times," McDonnell told reporters after his sentencing.

The case against McDonnell stemmed from a federal investigation into gifts he and his wife Maureen received while he was in office. McDonnell was, at one point, seen as a GOP rising star, even being mentioned as Mitt Romney's possible running mate in the 2012 election. (Video via WRIC)

A jury found McDonnell guilty on 11 of 13 corruption charges back in September. McDonnell had reportedly received around $170,000 in gifts and loans from Jonnie Williams, the CEO of a dietary supplement company. In return, McDonnell gave Williams political favors. (Video via WTVR)

Around the time of his conviction, reports said McDonnell could be sentenced to anywhere from thousands of hours of community service to decades in prison — though the latter outcome was less likely. Federal District Court Judge James Spencer reduced the maximum sentence to eight years during the hearing. (Video via CBS)

During the trial, hundreds of people — politicians, community leaders, relatives and friends — sent letters to Judge Spencer asking for a lenient sentence for McDonnell because of his good character. While Spencer reportedly said he was moved by the outpouring of support, a punishment had to be imposed.

McDonnell is the first governor from Virginia convicted on corruption charges. He must report to prison by February 9 and will have two years supervised probation after he completes his sentence. Maureen McDonnell's sentencing in the same case is set for February 20.