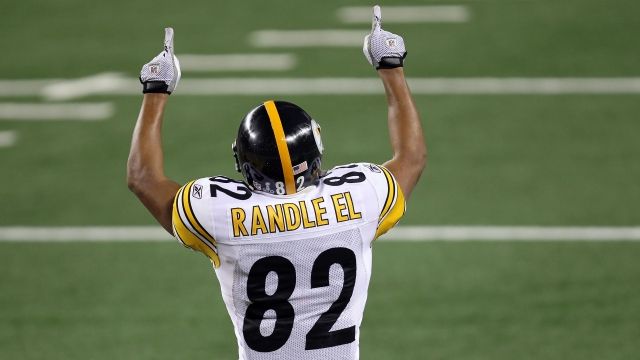 If former NFL wide receiver Antwaan Randle El could do it all over again, he says he wouldn't have gone pro in football.

In an interview with the Pittsburgh Post-Gazette, Randle El said, at 36 years old, he struggles with walking down stairs and remembering things. He said: "If I could go back, I wouldn't. I would play baseball. ... Don't get me wrong, I love the game of football. But right now, I could still be playing baseball."

Right out of high school, Randle El was drafted in the 14th round by the Chicago Cubs in 1997. But instead of joining the Cubs, he went to college at Indiana University and was drafted by the Steelers in the second round of the 2002 NFL draft.

Randle El spent nine years in the league — five seasons with the Steelers and four with the Redskins — before retiring in 2010 at age 31.

Steelers wide receiver Antonio Brown, who was teammates with Randle El in 2010, took the entire football team from his former high school to see the movie.

"As high school kids, they need to be aware of their future and raise some awareness," Brown told WPXI.

"I won't hit my head as much after watching that movie," Clairton High School wide receiver Aaron Mathews said.

Brown was ruled out of the Steelers Divisional Playoff game on Sunday due to a concussion he suffered the previous game.

Randle El currently works as an athletic director at a high school he helped found in Virginia. He says he cut the school's football program for financial reasons but also warns parents about the dangers of the sport.