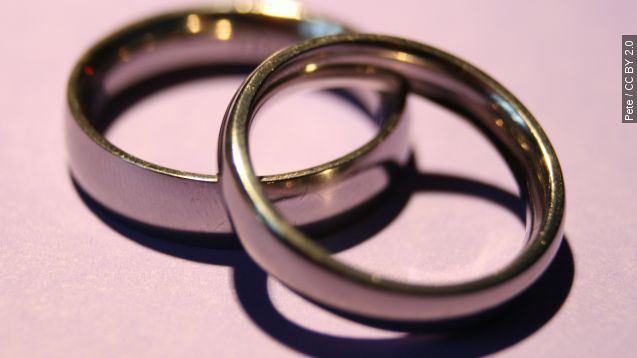 SMS
Former Ring Bearer And Flower Girl Now Husband And Wife
By Katie Link
By Katie Link
October 2, 2015
Seventeen years after walking down the aisle together as ring bearer and flower girl, a North Carolina couple got married.
SHOW TRANSCRIPT

Seventeen years after walking down the aisle as flower girl and ring bearer, Adrian Franklin and Brooke Gibson made the same trip — in the same church — as bride and groom. But it wasn’t exactly love at first sight.

"So any time she was trying to chase after me as I was trying to get away from her so then having to walk down the aisle with her was definitely a thing I wasn't looking forward to," groom Adrian Franklin told ABC.

Fate seems to have had a different plan. The two reconnected in high school and have been together ever since.

"We've had people tell us we're young and that's all right, we accept that, but at the same time we know it's God ordained and for God to bring our steps together this far we know our steps have been ordered by the Lord," Adrian told WBTV.

According to the bride's Facebook page, the North Carolina couple was married at the South Gastonia Church of God and celebrated their honeymoon on a cruise.