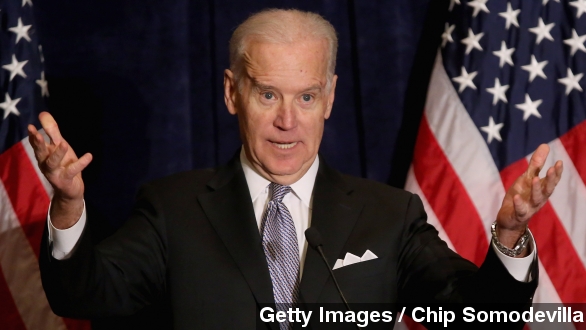 A mysterious online campaign called Draft Joe Biden launched Tuesday to try to get Biden to run for president in 2016, raising some eyebrows.

CNN reports the website was launched by former Obama for America staff and volunteers, who had filed papers with the Federal Election Commission for the site, which has a disclaimer saying it's not authorized by any candidate.

The website has an open petition urging the Vice President to run in 2016. Although the site's social media presence is pretty minuscule, the petition has gotten many more signatures —  almost 4,000 when this video was published.

William Pierce, who runs the organization, told Fox News, "Draft Biden 2016 thinks that voters want an election with real choices, not a coronation."

So is another Biden run for president actually likely?

There has been some speculation that Biden's recent trips to early voting states could mean he's trying to drum up support. He went to New Hampshire, Iowa and South Carolina last month - something even potential 2016 candidate Hillary Clinton hasn't done yet.

And back in January Biden openly hinted at a run during an interview on Good Morning America.

"Is there any chance you're going to challenge her?" said George Stefanapolous.

"Yes, there's a chance ... I think this is wide open on both sides," said Biden.

This comes as Clinton's e-mail scandal grinds into its third week. That media fiasco highlighted the potential weakness in having just one main 2016 Presidential hopeful for the Democratic party. (Video via C-SPAN)

A CNN survey of Democrats and Democratic-leaning independents from the week before the website launched showed Biden in second overall — but he was trailing Clinton by 47%.

But as Draft Biden points out, "Why Biden? Quite simply, WHY NOT BIDEN?"