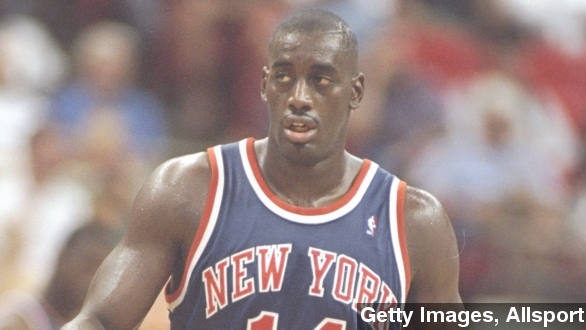 A spokesperson for the team confirmed the news to ESPN. Earlier this month, Mason was diagnosed with congestive heart failure and had multiple heart surgeries.

Forty-eight-year-old Mason played for six teams during his 13 seasons in the NBA. His career spanned from 1989 to 2003. (Video via Youtube / clyde davis, GH)

He's probably best known for his rough play alongside fellow glass-pounders Patrick Ewing and Charles Oakley for five seasons with the Knicks during their 90s heyday — with one trip to the NBA Finals in 1994.

Mason was a key player for the Knicks, and it earned him the NBA's Sixth Man Award in 1995.

"In the early-to-mid-90s, he really epitomized the way those teams played because he was such a hard-nose player. ... He was a fan favorite, so people really gravitated toward him in the New York area," ESPN's Ian Begley said.

Mason excelled later in his career too. He was selected to the NBA All-Star game in 2001 while playing for the Miami Heat.