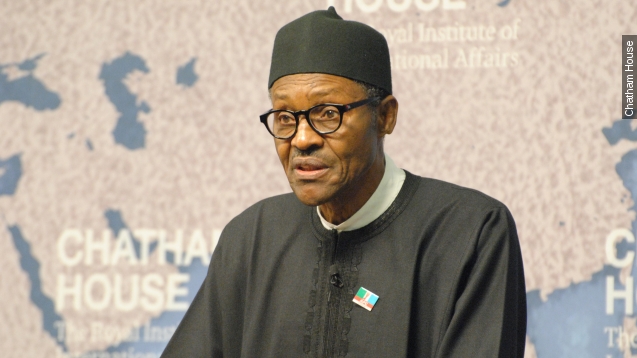 SMS
Former Military Ruler Presents Hope For Democracy In Nigeria
By Kate Grumke
By Kate Grumke
May 27, 2015
Nigeria is facing a test of its commitment to Democracy, and so far it's passing.
SHOW TRANSCRIPT

That celebration of democracy is something Nigerians are hoping Buhari will honor, especially as the country appears to have had its first peaceful transition between parties.

When Buhari defeated President Goodluck Jonathan in March's election, it was the first time an incumbent president had been defeated in Nigeria's history. (Video via Voice of America)

The election had been postponed due to the threat posed by the terrorist group Boko Haram, and there were fears the delay was an attempt by Jonathan to hold on to power. But Jonathan conceded after the election and asked Nigerians to accept the results peacefully. (Video SABC)

In the last Nigerian election, when Jonathan and Buhari were also running against each other, Buhari supporters went on a violent rampage that killed more than 800 people after Jonathan won. (Video via TV2Africa)

So this time around, the expected peaceful transition is seen as an accomplishment. It spurred one Nigerian-American journalist to write, "I cannot predict the way forward for Nigeria. ... However, in this moment, I am encouraged. My countrymen and women have inspired me, and I am grateful." (Video via Channels TV)

But when Buhari takes power on Friday, it won't be his first time leading the country. It will, however, be the first time he takes power peacefully.

Buhari led the country as a military strongman from 1983 to 1985 following a coup. He was ousted by another coup. His time as a dictator was marred by human rights violations, but Nigerians still considered him a better option than Jonathan. (Video via Nigeria History Channel)

And Buhari has pointed to his acceptance of defeat in three recent presidential elections — even when he suspected vote-rigging — as proof that he "submits himself" to democracy. (Video via Al Jazeera)

The New York Times writes, "This Jekyll-and-Hyde transformation that Mr. Buhari implicitly insists he has undergone can be hard to reconcile."

At the top of Buhari's agenda after he takes office will be an ongoing fuel shortage and the fight against Boko Haram. (Video via Sahara TV)

This video includes an image from Chatham House / CC BY 2.0.