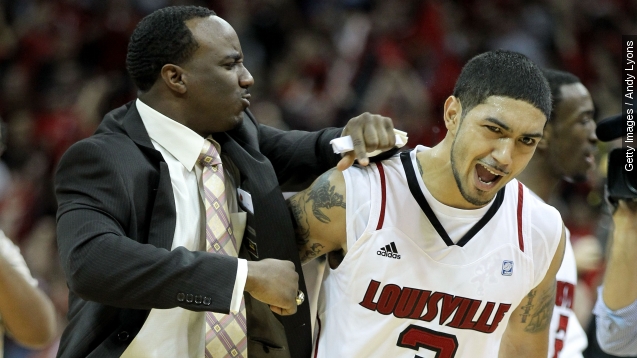 The allegations against Louisville Cardinal's basketball program just got even more troubling for the university.

Five former Louisville players and recruits told ESPN's "Outside the Lines" a university employee funded stripper parties on the school's campus. One player, who did not sign at Louisville, said: "I knew they weren't college girls. It was crazy. It was like I was in a strip club."

Earlier this month, former escort Katina Powell published a book titled, "Breaking Cardinal Rules: Basketball and the Escort Queen," which details alleged stripper parties with the U of L men's basketball team from 2010 to 2014.

Powell claims Andre McGee, a graduate assistant coach for the program at that time, paid for the parties. She says the strippers would get naked and could make "side deals" for more cash. (Video via Scout.com / Jody Demling)

"Side deals were sex, and, if they wanted to make extra money, that's what the side deal was. ... The recruit would pick out what girl he wanted. Andre would come to me, tell me what girl the recruit wanted," Powell told ESPN's "Outside the Lines."

McGee has since left the Louisville program and is currently an assistant coach at the University of Missouri — Kansas City. He's been placed on indefinite leave there.

"I don't believe in any form of cheating at all. ... When I found out a month ago, I tried to investigate a little bit on my own. I was immediately shut down by our compliance department," Pitino said.

The NCAA and the University of Louisville are investigating the allegations.