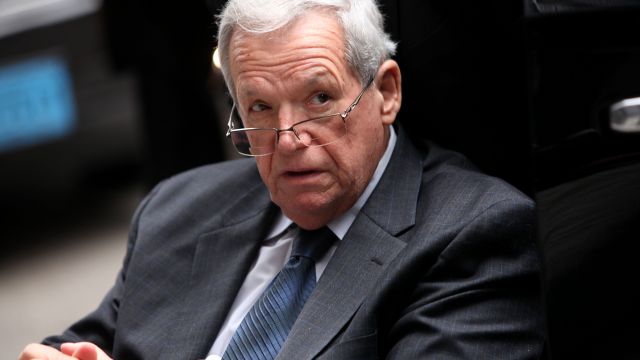 SMS
Former House Speaker Begins 15-Month Sentence For Abuse Hush Money
By Calvin Stovall
By Calvin Stovall
June 22, 2016
Dennis Hastert avoided molestation charges because of the statute of limitations but was given a 15-month sentence for his financial crimes.
SHOW TRANSCRIPT

Hastert pleaded guilty in April to making hush-money payments while trying to cover up allegations of sexual abuse.

The 74-year-old was accused of molesting at least four boys over three decades ago during his time as a wrestling coach at an Illinois high school.

Authorities couldn't charge Hastert with abuse because of the statute of limitations. After multiple victims came forward and Hastert admitted to "mistreating" the boys during the trial, the judge more than doubled the federal prosecutor's sentencing recommendation.

The judge also ordered Hastert, who stood second in line for presidential succession as House speaker from 1999 to 2007, to register as a sex offender and pay a $250,000 fine.

U.S. District Judge Thomas M. Durkin said Hastert will be placed in a facility that houses "a significant percentage" of sex offenders to avoid fellow inmates singling him out.