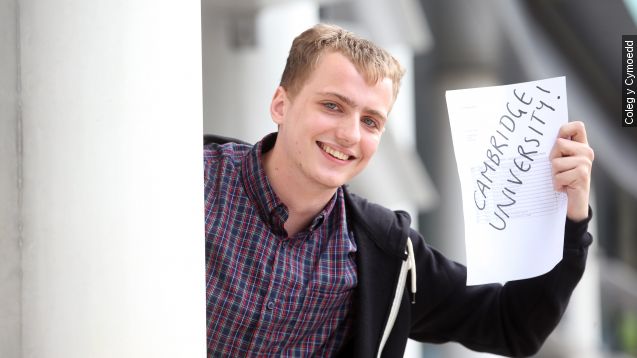 This is Jacob Lewis. Not too long ago he was homeless. Now, he's going to Cambridge.

"Vindication for all the nights out there I turned down, all the friends I stood up. Absolute vindication," Lewis said in a BBC video.

After dropping out at 17 and taking three years off, Lewis, now 22, returned to schooling at Coleg y Cymoedd, a Welsh further education school.

While studying, Lewis says he became homeless after a falling out with his family and was forced to sleep on his friends' sofas. He says he was spending up to 12 hours a day in the college library.

That's when the college stepped in, tapping into a student hardship fund to provide Lewis with travel and living expenses, even getting him a hotel room when he needed it.

From there, Lewis went on to earn what the college says are some of its most successful marks ever. The Cambridge-bound grad plans to study law, where he says he hopes he can do some good in the world.

This video includes images from Coleg y Cymoedd and music by Birocratic / CC by ND 3.0.