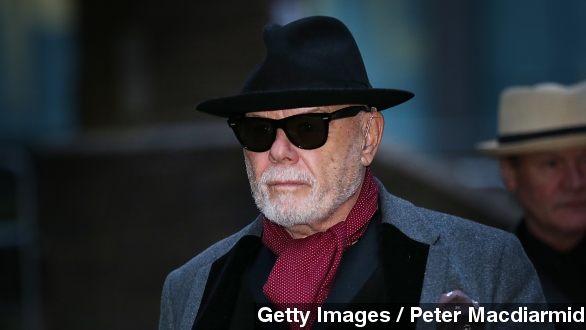 Former English glam rocker Gary Glitter, who reached his career height in the '70s, will likely be spending the rest of his life in prison.

Earlier this month Glitter, whose real name is Paul Gadd, was found guilty of multiple sexual abuse charges, including one count of attempted rape and four counts of indecent assault.

Sky News reports, "The former glam star's youngest victim was 10 years old when he crept into her bed and tried to attack her. ... The judge in case said ... that the crimes were truly appalling."

The oldest girl to make claims against Gadd was 13 years old at the time of the incident. The 70-year-old denied the allegations, but as Channel 4 News reports, he didn't seemed shocked by his sentence.

"Glitter showed no reaction was his sentence was handed down and he was led from the dock."

In court Friday the detective chief inspector on the case said: "Paul Gadd has shown himself to be a habitual sexual predator, who took advantage of the star status afforded to him by targeting young girls who trusted him and were in awe of his fame. His lack of remorse and defense that the victims were lying make his crimes all the more indefensible."

In 2006 Gadd served three years in a Vietnamese jail after being found guilty of molesting two girls, ages 10 and 11. The jury in this most recent hearing did not consider that conviction during its deliberation.

Gadd was the first to be arrested under Britain's Operation Yewtree, which looks into claims of sexual abuse against children. The program began in 2012, around the time of Gadd's arrest.