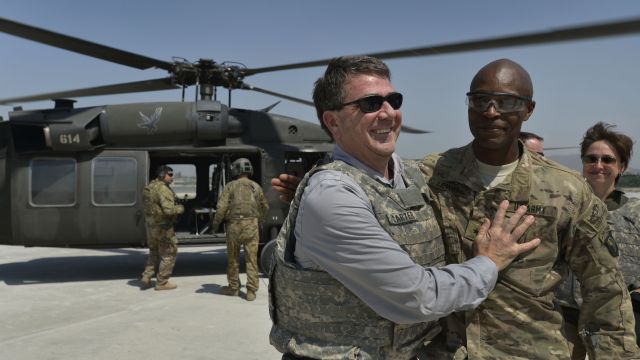 It's generally a bad idea to rack up an $1,800 bill at a strip club. It's an even worse idea to try to pay off that tab on the company credit card. And really, really don't do either of those if you work for the U.S. Department of Defense.

Then-Maj. Gen. Ron Lewis used to be an aide for former Defense Secretary Ash Carter. He was fired from that role about a year ago for misusing a government credit card. And a DOD report released in October went into more detail about what that misuse entailed.

Specifically, Lewis used the government card to pay about $1,100 to a South Korean strip club and almost $1,800 to a different strip club in Rome. He has since disputed those claims, only admitting to "errors in judgement."

Lewis — who was a three-star general at the time — lost one star right after the report was released. Now he's being demoted again and forced into retirement.

The decision comes almost a week after the U.S. Air Force took back two stars from General Arthur Lichte after investigators found he engaged in an inappropriate sexual relationship with a female subordinate.

Lewis initially claimed that his credit card was stolen in South Korea, and the card company forgave the $1,100 charge. "Lying to a credit card company and bank" is also on his rap sheet, according to the report.

On the release of the report, Carter reiterated what he said when Lewis was first fired: He expects "the highest possible standards of conduct from the men and women in this department. ... No exceptions."

The report also accused Lewis of engaging in inappropriate behavior around women and excessive drinking in public but didn't find enough evidence to substantiate charges based on those findings.