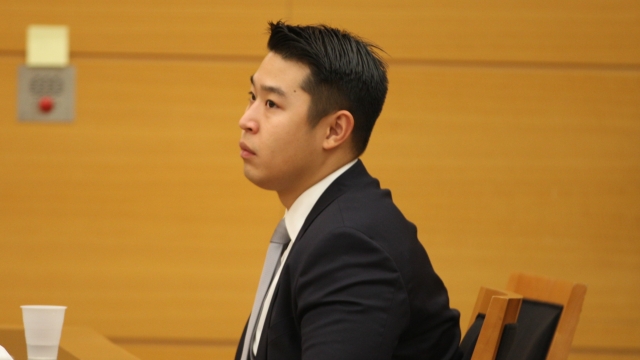 SMS
Former Cop Gets Probation, Community Service For Killing Unarmed Man
By Eugene Daniels
By Eugene Daniels
April 19, 2016
Peter Liang's sentencing is not that much of a surprise. The DA's office recommended no jail time in March.
SHOW TRANSCRIPT

Peter Liang, the former New York officer found guilty of manslaughter in the 2014 fatal shooting of Akai Gurley, won't spend any time behind bars. A judge sentenced Liang to five years of probation and 800 hours of community service and reduced the conviction to criminally negligent homicide.

While there's sure to be some backlash, the sentencing basically lines up with what the district attorney's office recommended. Before the sentencing, DA Ken Thompson released a statement saying the case wasn't about revenge, adding Liang's "incarceration is not necessary to protect the public, and due to the unique circumstances of this case, a prison sentence is not warranted."

Before the sentencing, Liang apologized to Gurley's family, with his lawyer adding the former cop "is not a villain or a demon."

Liang was patrolling a housing project with his gun drawn when he says he was surprised by a noise and accidentally fired. Prosecutors argued Liang broke department policy by walking around with his finger on the trigger of his gun.

Liang and his partner then argued about who would call in the shooting instead of providing Gurley with any first aid. Both testified they never received the proper CPR training.

The case had a bit of a different tone than other publicized officer-involved shooting cases in the U.S. Liang's supporters argued he was being discriminated against because he's Chinese-American and claimed he was a "scapegoat" for white officers who hadn't been indicted.

After the sentencing, Gurley's aunt told NBC: "Akai's life does not matter. Black lives do not matter. But don't worry: Justice will be served one way or another."

This video includes images from Getty Images and clips from WABC, WCBS and CNN.