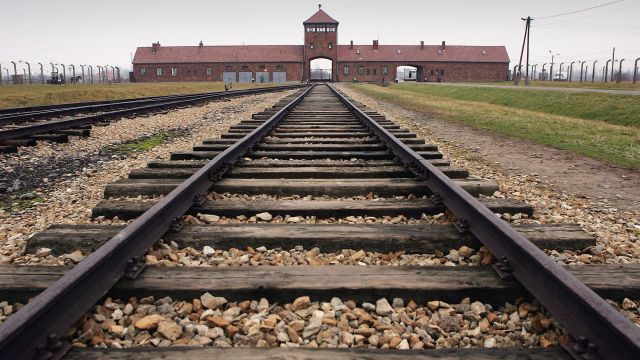 SMS
Former Auschwitz Guard Sentenced To 5 Years In Prison
By Matt Picht
By Matt Picht
June 17, 2016
Reinhold Hanning was convicted on 170,000 counts of accessory to murder for his time as a prison guard at Auschwitz.
SHOW TRANSCRIPT

A 94-year-old German man has been sentenced to five years in prison for his role as an SS guard at the Auschwitz death camp.

Reinhold Hanning apologized several months ago for his service at the camp, which lasted from 1942 to 1944. His unit was tasked with sorting new arrivals to the camp, determining who would be imprisoned and who would die.

There's no evidence Hanning ever killed anyone directly, but he was convicted as an accessory to the murder of 170,000 people. That's the number of Hungarian Jewish victims recorded in the camp's transportation logs during Hanning's service.

The sentencing was attended by four Auschwitz survivors whose testimony helped convict Hanning. One of the survivors told Deutsche Welle the sentence sends an important historical message.

Leon Schwarzbaum told the outlet: "I'm not angry, really, I'm not. I don't want him to go to prison, but he should have spoken up more, especially for the younger generation that's growing up today."

Germany has been successfully convicting Nazi concentration camp guards following a precedent-setting case in 2011. Hanning plans to appeal his conviction.