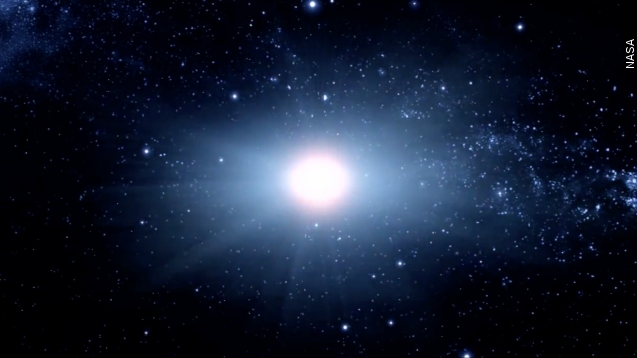 SMS
Forget Explosions, Aging Galaxies Are Slowly Strangled
By Christine Slusser
By Christine Slusser
May 15, 2015
Researchers at the University of Cambridge and The Royal Observatory, Edinburgh found galaxies could be dying because of space strangulation.
SHOW TRANSCRIPT

Space. In the Star Trek world, it's the final frontier, something still left for earthlings to explore.

"Your father was captain of a star ship for 12 minutes, he saved 800 lives ... I dare you to do better, enlist in Starfleet." (Video via Paramount Pictures / "Star Trek")

And while the idea of exploring space sounds really cool, and maybe even peaceful and serene at times ... apparently galaxies are getting strangled to death. Huh?

The brainiacs at the University of Cambridge and the Royal Observatory, Edinburgh published research in the journal Nature that says galaxies could be dying because of space strangulation.

But let's back up a minute and explain some cool stats about stars. For portions of their lifetime, stars burn hydrogen as fuel. Galaxies stop making new stars when that fuel runs low, kind of like a car running out of gas.

As Wired points out, this new study is challenging our old views that star formation just kind of ... stops. And rather suddenly at that.

The researchers looked at the metals made by stars as they consume hydrogen. As stars consume, they produce measurable amounts of other metallic elements, such as iron.

The researchers looked at the metal content of 26,000 galaxies. If the galaxy kicked the bucket suddenly — and the gas was sucked into a supermassive black hole at the center of the galaxy, for example — that metal formation should have stopped. But, researchers obviously found out they didn't, or we wouldn't be bringing you this story.

Rather morbidly, researchers found galaxies don't just go kaboom! and that's that. Instead, based on their steadily increasing metal content, the researchers believe the galaxies are slowly strangled as they run out of hydrogen.

The next piece of the puzzle, an astronomer says, is figuring out why they die in the first place.

This video includes music by Broke for Free / CC by 3.0.