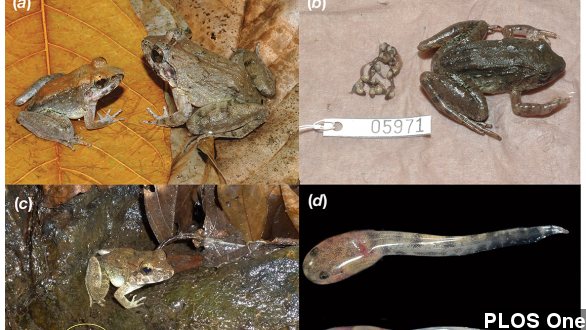 These are frog eggs. This is how we're used to frogs having babies. They lay eggs, those eggs hatch into tadpoles ... and you learned the rest in science class.

However, a newly discovered species of frog has upped the ante. They skip the egg stage and just give birth to tadpoles.

This is the newly discovered fanged frog species found on Sulawesi Island, Indonesia. In the journal PLOS One, it notes this frog species is unique, because skipping the egg stage and going straight to tadpoles means it possesses internal fertilization.

"Fewer than a dozen of the 6455 species of frogs in the world are known to have internal fertilization, and of these, all but the new species either deposit fertilized eggs or give birth to froglets."

This makes the species even more unique, as PLOS One said, because other frogs that skip the egg step typically give birth to froglets, or baby frogs, but these frogs still give birth to tadpoles.

Before you make the mammal comparisons, don't get too scifi. They're still just amphibians.

Online newspaper Haaretz quoted one of the researchers behind the fanged frog finding, Jim McGuire. He also made the frog-human comparison, albeit he was as dramatic as we were:

"Reproduction in most frogs could not be more different from human reproduction. In this case, what is most interesting, ironically, is that the reproductive mode is more similar to our own."

The discovery happened by happenstance. McGuire was walking through the Indonesian island when he saw what he thought was a male frog. He picked it up, and quickly discovered it wasn't male.

He told LiveScience: "As soon as I picked her up, she squirted tadpoles all over my hand."

McGuire described another instance of the tadpole phenomenon to NPR. When he and his colleagues captured and euthanized a frog, out came the tadpoles, and they were alive. He called it "creepy" and compared it to that famous scene we all know in "Alien."

But, for as intriguing as frogs giving birth to live tadpoles may be, PLOS One says since researchers haven't witnessed their birth in the frog's natural environment, there's still the possibility that the frogs could be capable of giving birth to froglets instead.

This video includes an images from Geoff Gallice / CC BY 2.0.