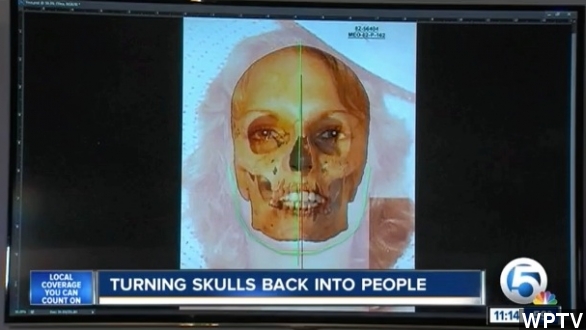 SMS
Forensic Artist Tackling Mystery Of 86 Unidentified Skulls
By Jay Strubberg
By Jay Strubberg
February 13, 2015
One forensic artist in Florida is trying to solve a mystery that involves a back room full of human bones.
SHOW TRANSCRIPT

One forensic artist in Florida is trying to solve a mystery that involves a back room full of human bones. (Video via WPTV)

Eighty-six boxes of bones, to be exact. And each one holds an unidentified human skeleton.

But Paul Moody of the Palm Beach County Sheriff's Office is focused on one piece in particular: the skull.

"The skull is the roadmap for what each one of us looks like," Moody said.

Moody is analyzing each one of the skulls using advanced computer programs and other electronic gadgets to help him draw sketches and create a digital image of what those people looked like.

One woman, Holly Marth, had sent Moody this photo of her sister, Tina Beebe, who disappeared in 1981 — in the hopes Moody would be able to find her sister among the remains.

And sure enough, Moody was able to use the image to match it with a skull and reconstruct Beebe's face.

"Her photo and then we're going to take it back to the skull itself and you can see how it lines up perfect. ... And, it watch, everything moves but the teeth. That was the tell-tale sign of the whole thing," Moody said.

Interestingly, Moody isn't alone in this kind of forensic endeavor.

The New York Times says students at the New York Academy of Art are using similar methods using clay molds to help police identify murder victims and maybe even their killers, too.