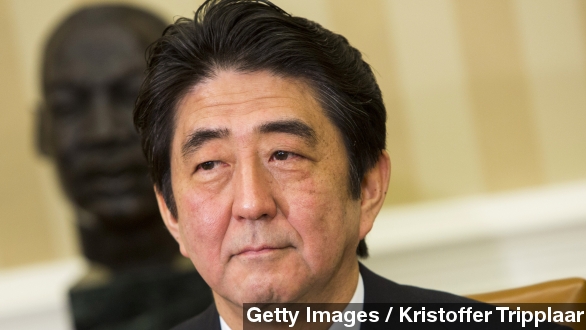 SMS
For First Time, ISIS Demands Cash In Japanese Hostage Video
By Cliff Judy
By Cliff Judy
January 20, 2015
A video believed to have been released by ISIS threatens to kill two Japanese men if the country doesn't give militants $200 million in 72 hours.
SHOW TRANSCRIPT

A video that appears to be released by ISIS threatens to kill two Japanese citizens if the country doesn't give the militants $200 million in the next three days. Japan's actions so far show its leaders likely consider the video legit.

The black-clad man speaking in the video says Japan must pay for helping fund the fight against ISIS. The New York Times, like several other media outlets, said it could not independently verify the video's authenticity.

The other man is presented as Haruna Yukawa, whose website says he's a military contractor. Videos posted to Yukawa's blog this summer show him moving through cities in Iraq. The blog says he was kidnapped in August. (Video via YouTube / Haruna Yukawa | JAPAN PMC Co., Ltd.)

CBS called the video a possible "change in tactics" for the militants who've held large swaths of Iraq and Syria for several months now.

It's unclear whether that's a significant shift motivated by a need for money. The militants have time and time again been called the richest terrorist organization in the world even as oil prices dropped and the oil fields they've captured stopped producing as much cash as they did over the summer. (Video via YouTube / ولاية البركة & Newsy)

Japan's government spokesman stopped short of confirming the video's authenticity, but said to reporters at a Tokyo news conference Tuesday, "It is unforgivable to use human lives as shields. I feel strong anger. We will make the utmost efforts toward the early release of the Japanese hostages.”

Prime Minister Shinzo Abe is on a trip through the Middle East, and he pledged money toward the fight against ISIS over the weekend.

Abe's moves to heighten Japan's global status diplomatically and militarily has caused tension both for neighbors and within the country. BBC's Tokyo correspondent said the hostages will only make Abe's critics louder.

"Many of his critics will say, look, this is the result," said BBC's Rupert Wingfield-Hayes. "We should not get involved with international affairs. We should go back to being a peaceful, quite isolated country because this is the result. Our citizens get threatened."

BBC's Rupert Wingfield-Hayes says while Japan has paid ransoms for hostages before, Abe said Japan won't do that in this case or withdraw its support from countries fighting ISIS.