Football In Alaska Is Like Nothing You've Seen Before 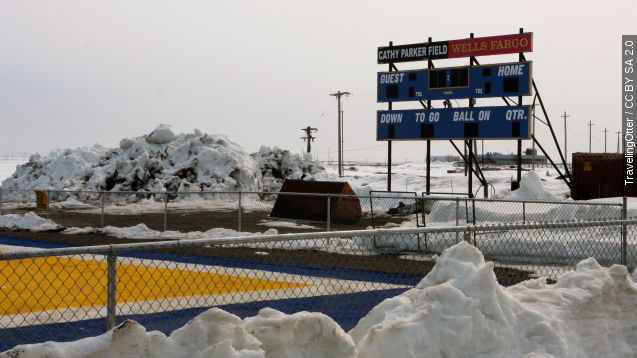 "Whenever the wind chill's below zero, we've got to play," one high school coach said.

"You better love this game if you're playing in Barrow," said another person on the show.

It's a place where you'd think football would be an impossible sport to play outdoors, but high schoolers around Alaska continue to hit the gridiron despite frigid temperatures.

ESPN first documented the school in 2006 when the Whalers started their football program. Many of the kids had never played before, and the team practiced on dirt fields.

But things have changed. Barrow High School is now home to a state-of-the-art blue turf field. Sports Illustrated profiled the same team in 2014.

"It's cold, and it can get to negative 40 in the winter time," a Whalers player said.

As if that weren't enough, the school's field sits next to the Arctic Ocean and trained snipers are there to keep polar bears away.

The school is even set for a movie on the big screen. The Hollywood Reporter says "Touchdown on the Tundra" will focus on a Florida mother's desire to help out the team located thousands of miles north of her.

For comparison, Texas, the U.S.'s second largest state geographically and a hub for NFL talent, has more than 2,300 players listed.

Arguably the most well-known NFL player from Alaska is two-time Pro Bowl offensive guard Mark Schlereth, who enjoyed 12 seasons in the league before becoming an analyst for ESPN.

He's since been inducted into the Alaska Sports Hall of Fame.

It's safe to say the Friday night lights in Alaska are a bit different. NFL Network's docu-series airs Tuesdays at 9 p.m. EST.