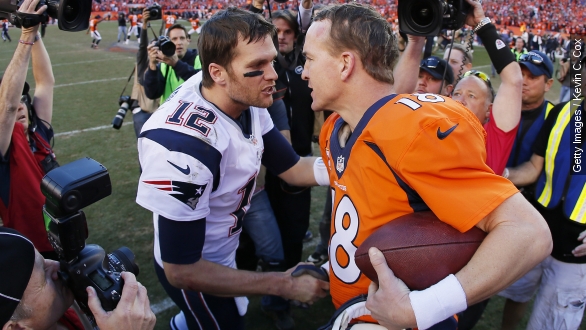 SMS
Football Gurus In Analysis Frenzy After NFL Schedule Release
By Jay Strubberg
By Jay Strubberg
April 22, 2015
The 2015 NFL schedule has been released, so, naturally, we're being treated to more analysis of it than we can possibly handle.
SHOW TRANSCRIPT

The release of the third "Star Wars" trailer? Nope.

The arrival of the first batch of Apple Watches? Not yet.

"The Fight of the Century:" Mayweather vs. Pacquiao? Almost there. Wait for it ...

"Ladies and gentlemen, the schedule."

"Get your tailgates ready. The most coveted schedule release in sports."

"NFL schedule release day. Might as well put a hashtag on it because it is trending all over the place."

And ... boom goes the dynamite?

"Every comment has to do with the NFL schedule. It must be in the form of alliteration. So I'm up first. The Seattle Seahawks will not be playing the Buffalo Bills."
"That's way too many words."
"That's not alliteration."

Oh, yes, we simply can't get enough of it: whether it's the NFL Scouting Combine, the upcoming draft or even the release of next season's schedule — the off-season has pretty much become a season of its own, enough to give the most diehard fans that fix until opening kickoff.

So let the random analysis of the 2015 NFL schedule begin! And with it comes lists. We love lists!

Both Fansided and Rant Sports tackled the five toughest schedules the league dished out. And, by the way, they look nothing alike.

For others, a more basic approach: must-watch match-ups. New York Post went with a top five.

Yahoo kicked it up a notch with a top 10. Oh, we can do better than that.

Not enough? No worries. SB Nation has you covered with a rundown of the 15 best games on the gridiron next season.

And, then, there's the more thorough breakdown.

But our personal favorite was CBS, which did some digging and unearthed the 19 — yes 19 — Super Bowl rematches on the 2015 schedule. That's just impressive.

We'll spare you the X's and O's here because, frankly, there's already enough analysis out there.

By our count early Wednesday morning, keyword searches on Google shot out hundreds of articles in reference to the NFL schedule.

It was enough to get under the skin of a writer at Deadspin, who wished the noise would just go away for awhile.

"All of is this is just a symptom of football’s complete inability to ever fall out of the news cycle. ...  Pretty soon, we’re going to have NFL writers tweeting stuff like 'Breaking: The Minnesota Vikings will play most of their games on Sunday,' and 'Report: the 49ers will play eight home games and eight away games.'"

Of course, this isn't to belittle things like strength of schedule, because it definitely could affect a team's chances of making it to the postseason. But, come on, can we just get through one month of baseball season first?