Foot-Powered Scooters Could Be The Most Dangerous Toys 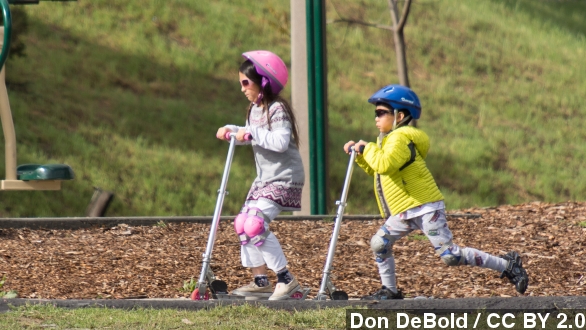 SMS
Foot-Powered Scooters Could Be The Most Dangerous Toys
By Matt Moreno
By Matt Moreno
December 1, 2014
Scooters were linked to 580,000 toy-related injuries between 2000 and 2011.
SHOW TRANSCRIPT

We've all been there. The parents take the training wheels off the bike, and boom — a scuffed-up elbow and a throbbing knee.

But new research suggests it's scooters — not bikes — that kids might have the most painful memories of.

Between 1990 and 2011, toy-related injuries jumped about 40 percent according to research from Nationwide Children's Hospital. Scooters, wagons and tricycles caused 42 percent of injuries to kids between 5 and 17 and 28 percent of injuries to those younger than 5. Scooters alone caused 580,000 injuries between 2000 and 2011. Doctors blame a spike in scooter sales as well as a lack of proper scooter safety equipment.

In all, about 3.3 million kids were sent to emergency rooms for toy-related injuries in those two decades, which breaks down to about one injury every three minutes.

According to the U.S. Consumer Product Safety Commission, toy-related injuries are injuries "related to, but not necessarily caused by, toys."

Younger children are more susceptible to swallowing toys, so parents can be proactive by checking toy packaging for warnings about choking hazards and supervising the children as they play.

The study, published in Clinical Pediatrics, also states injuries on those foot-powered scooters, along with wagons, tricycles and other ride-on toys, increased as kids got older.