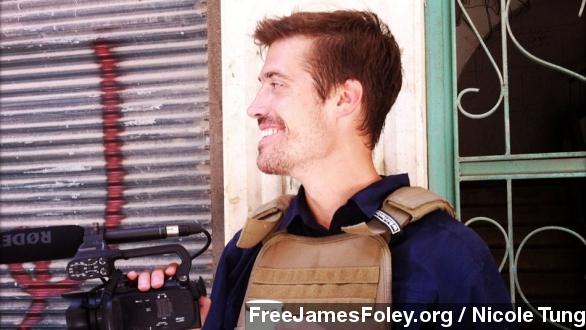 SMS
Foley's Family Releases Memorized Letter From Captivity
By Cliff Judy
By Cliff Judy
August 25, 2014
Foley's family says his jailers took any letters he tried to write, so he asked a fellow captive about to be released to commit the letter to memory.
SHOW TRANSCRIPT

Journalist James Foley's family shared a memorized letter he dictated to a fellow captor. The family released the letter the same day hundreds remembered him in his home state.

The letter, posted to Facebook, has several messages for individual family members. It also details how he and 17 other captives passed the days by sharing memories and playing games with scraps found in their holding cell.

FOLEY: "I have had weak and strong days. We are so grateful when anyone is freed; but of course, yearn for our own freedom. We try to encourage each other and share strength."

The post says Foley's jailers took any letters he tried to write, so he asked a fellow captive about to be released to commit the message to memory.

Foley disappeared around Thanksgiving 2012 before appearing in a gruesome video of his killing released by the Islamic militant group ISIS.

Much of Foley's memorial service in Rochester, New Hampshire, focused on his efforts to tell the world about war regimes and what was happening to people in the world's most dangerous places. (Video via WFXT)

Around the same time Sunday, the U.S. State Department released a statement saying another American journalist Peter Theo Curtis was released after his nearly two years in the captivity of a different terrorist organization. (Video via CNN)

But even joy for the Curtis family was tempered by Foley's recent execution. With Curtis's mother still living in Cambridge and the Foley's funeral only about an hour-and-a-half north, Boston stations covered both heavily. (Video via WBZ-TV)

In a statement, Curtis's mother wrote, "We are so relieved that Theo is healthy and safe and that he is finally headed home after his ordeal, but we are also deeply saddened by the terrible, unjustified killing last week of his fellow journalist, Jim Foley."