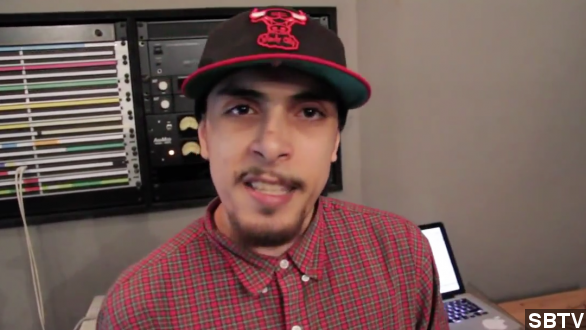 The Sunday Times and other outlets are pointing the finger at a British national named Abdel-Majed Abdel Bary, aka L Jinny.

Nicknamed Britain's "Hip Hop Jihadist", Bary has a handful of rap videos on YouTube. He even managed to get one song on the U.K.'s popular BBC Radio 1 station.

But last year he left his affluent family home in west London to join the Sunni militant group ISIS in Syria.

​Since then, he has been a subject of fascination for the British media with stories following his Syrian exploits appearing in The Sun and the Daily Mail.

The Mail put up a story earlier this month showing a man identified as Bary posing with a severed head in Syria, and late last December posted another photo apparently showing him holding an assault rifle.

No officials have come forward to say Bary is definitely the man responsible, but the British press has put together its own case.

The Independent is one of several outlets to point out Bary's father, Adel Abdel Bary, was extradited to the U.S. from the U.K. in 2012 for his alleged role in the bombings of American embassies in Kenya and Tanzania in 1998.

And the Daily MIrror echoed a common rumor about Bary: that he was radicalized by an Islamist preacher in the U.K. named Anjem Choudary. (Video via YouTube / anjemchoudary)

​​Sir Peter Westmacott, the British ambassador to the U.S., appeared on CNN's State of the Union Sunday to comment on the media's speculation.

"I see that the British media this morning are speculating that we are very close to identifying who this guy is. ... I think we're not far away from that, we're putting a lot into that."

There are two other British citizens under investigation for Foley's murder — one a former drug dealer and the other a brother of a British national charged with kidnapping a British journalist in Syria.