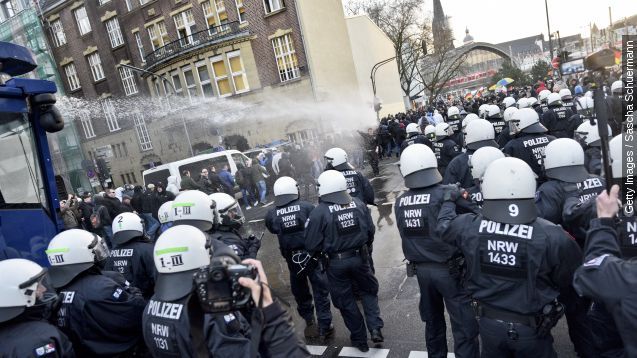 SMS
Focus Turns To Migrants After New Year's Eve Attacks In Cologne
By Matt Moreno
By Matt Moreno
January 11, 2016
Police say many suspects in the 200-plus sexual assaults that took place that night were refugees or asylum seekers, stoking protests in Germany.
SHOW TRANSCRIPT

Almost two weeks after New Year's Eve, protesters in Germany are still reeling from attacks that happened that night.

Officials in Cologne, Germany, say there were more than 500 criminal complaints that night, more than 200 of which involved reported sexual assaults. (Video via CCTV)

"I was touched from behind my back, and I was touched under my skirt, and my buttocks were touched. I tried to defend myself, swinging my arm backwards, and I almost fell down the stairs. There was so many people there you couldn't do anything," one person said.

Police say a group of about 1,000 people, mostly men, were responsible for the attacks. The suspects, police say, were mostly refugees or asylum seekers from North Africa, which has prompted anti-immigration protesters to hit the streets.

"There's a lot of anger, and this is what this is. This is a lot of anger. What these assaults have done is they've fed into the fears of people," CNN reported.

Europe, especially Germany, has struggled with xenophobia for years as the country continues to let in record numbers of refugees.

More than a million refugees came to Germany in 2015 as war-torn countries including Syria, Iraq and others struggled to achieve peace at home.

Several men have been arrested in connection with the New Year's Eve attacks, but police are continuing their investigations and are expected to make more arrests in the coming days. (Video via Press TV)