Flying? Your Driver's License Might Not Get You Through Security 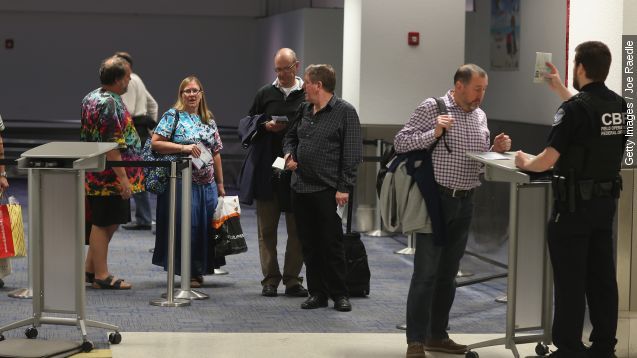 SMS
Flying? Your Driver's License Might Not Get You Through Security
By Christian Bryant
By Christian Bryant
December 28, 2015
The Department of Homeland Security might soon enforce the Real ID Act; residents in states that aren't compliant might have a difficult time flying.
SHOW TRANSCRIPT

As if getting through an airport wasn't stressful enough, the Transportation Security Administration could soon reject a pretty common form of ID for most Americans — the driver's license.

Driver's licenses from some states might not be enough to get through a security checkpoint at an airport because of the 10-year-old REAL ID Act. That act was designed to increase  security standards for identification following the 9/11 attacks.

States initially had until the end of 2009 to comply with those standards, but the federal government kept pushing the deadline back.

Currently, 27 states are exempt from those standards until certain times in 2016. But if you live in Minnesota, bad news: Your state is noncompliant. (Video via CNN)

So, what exactly does this mean for travelers? If you have a passport, you're in the clear. You can use that to get through security.

If you don't have a passport, you can still use your driver's license, but ...

"They may have to go through an extra measure of security that might be another line, or possibly being questioned at the airport," said David Druker, spokesman for the Illinois Secretary of State.

If you don't have your driver's license or any other REAL ID-compliant form of ID, you might still be able to get on your flight, but not before having to fill out a form and answer a few questions, which might be worse than a surprise pat-down.

If you live in a state that's noncompliant with the DHS standards, don't get too worked up. The agency's website says it "will ensure that the traveling public has ample notice (at least 120 days) before any changes are made that might affect their travel planning."