Flying Car Could Be For Sale As Soon As 2017 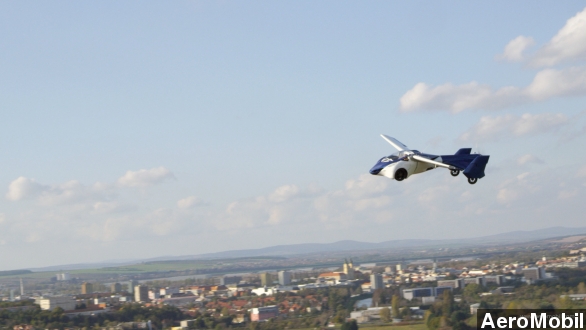 We've been dreaming about flying cars since "The Jetsons." (Video via American Broadcasting Company / "The Jetsons")

So far, though, our tires have stayed on the ground.

"We were lied to by 'The Jetsons.' ... According to that show, we're supposed to be tooling around in flying cars by now." (Video via NBC Studios / "The Flying Car")

But now, we're probably closer than we've ever been. Check out this beauty, the AeroMobil. It can drive on the road with other cars, but it can also fly.

The company, also called AeroMobil, made the car part of this innovation very, well, car-like. It can fit in a parking space and uses regular gas. In the air, it's also very ... plane-like. It can be used at any airport, AeroMobil says, and can take off any grass or paved strip at least 950 feet long.

Can't wait to get your hands on one? AeroMobil's co-founder is shooting for a 2017 release date.

And RT says although final pricing is still being worked out, it's still going to cost less than some supercars.

The Verge says the company's co-founder didn't name a specific price, just that it would cost more than a couple hundred thousand euros.

Even if you have that kind of cash, only pilots will be able to fly this bad boy. Sorry, fans of "The Fifth Element" and "Back to the Future."

"You've gotta come back with me!"

"Back to the future!"

This video includes images from AeroMobil.