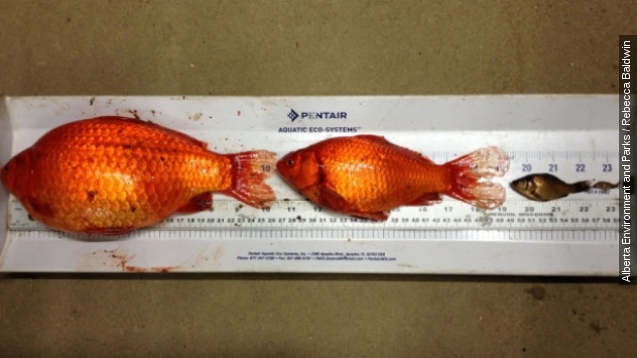 SMS
Flushed Goldfish Prompt Invasive Species Scare In Canada
By Christian Bryant
By Christian Bryant
June 24, 2015
The Alberta, Canada, government plans to launch a campaign to stop the spread of invasive species after giant goldfish were found in a storm pond.
SHOW TRANSCRIPT

Goldfish and rabbits probably don't have much in common, but one Canadian province is comparing the reproductive abilities of the two species to describe a goldfish problem that just keeps multiplying — literally.

The Alberta, Canada, government is asking goldfish owners to refrain from tossing their fish in bodies of water or flushing them down the toilet. The warning comes after dinner plate-sized goldfish were found in an Alberta storm pond.

Alberta Environment and Parks officials are concerned these fish are reproducing in the wild because they could disrupt aquatic environments. Take for instance this goldfish invasion in Boulder, Colorado, earlier this year.

And goldfish aren't the only problem. Alberta's government has plans for a campaign this summer to stop the spread of invasive species, which it defines as non-native species with "little to no natural predators" and that pose a risk to the "economy, environment or human health."

Zebra and quagga mussels, like those in this photo, can spread quickly, survive out of water for 30 days and damage boats and pipes. The Alberta government is asking boaters from other provinces and states to thoroughly inspect and clean their gear to prevent invasive species from spreading.

As for goldfish owners, their jobs are much easier: Dignify your presumably dead fish by giving it a proper burial instead of flushing it down the toilet — where it could later reappear in the wild.