Floyd Mayweather: I'm Being Offered '9 Figures' To Come Back 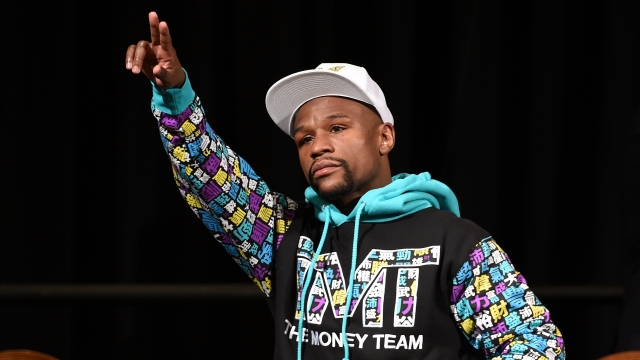 SMS
Floyd Mayweather: I'm Being Offered '9 Figures' To Come Back
By Matt Moreno
By Matt Moreno
May 1, 2016
Mayweather says he's in talks with CBS and Showtime about a possible comeback.
SHOW TRANSCRIPT

Retired boxer Floyd Mayweather might not be retired for much longer.

"Everyone is asking me, 'Is Floyd Mayweather coming back?' Right now, I'm happy being on this side, but I've been talking with CBS and Showtime and you just never know," Mayweather told Showtime's Jim Gray.

When speaking with Gray on Saturday night, Mayweather said upwards of "nine figures" have been thrown around for a possible comeback. He said he'd also likely need a championship fight to do it.

The 39-year-old Mayweather hasn't fought since September's bout against Andre Berto a few months after his "Fight of the Century" with Manny Pacquiao.

Mayweather's win over Berto tied him with legendary heavyweight Rocky Marciano for the best record ever for a retired champion. He said the opportunity to go 50-0, along with the money, could motivate his return.

While many fans are calling for a bout against the undefeated Gennady Golovkin at 160 pounds, Mayweather alluded that's not very likely. He instead suggested Triple G fight Andre Ward.

Mayweather said right now he's happy with being on the outside of the ring, working with his Mayweather Promotions brand. But, per usual, let's not count Mayweather out just yet.

This video includes images from City of Boston Archives / CC BY 2.0 and Getty Images.