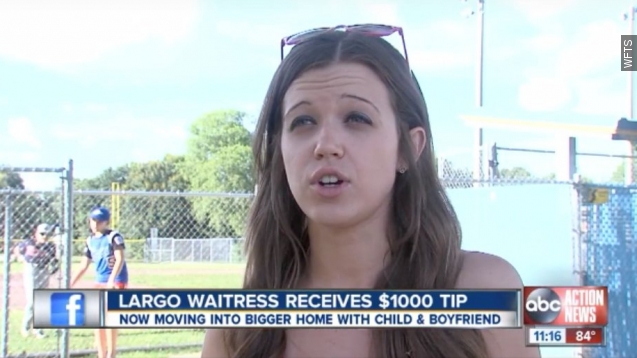 "She actually told me she was my guardian angel if I ever needed anything," Kari Vanardoy told WFTS.

"Thought it was $10 at first, because that would have been a nice tip on that tab. But it was really two extra zeros," Vanardoy said.

Newsy's partners at WFTS report Vanardoy is a 22-year-old mother who's been attending school and working multiple jobs to save up enough money to find a bigger place to live.

She told WFTS she'd never served those patrons before, but Vanardoy did say she'd once received a $160 tip when her customers inquired about tips she'd gotten in the past.

We're seeing more and more of these generous tips: In November, a Colorado waitress was left a $1,000 tip by a woman who wanted to pay it forward after seeing a Facebook post about leaving large tips.

Vanardoy says with the help of that extra money she can now purchase furniture for her new home.