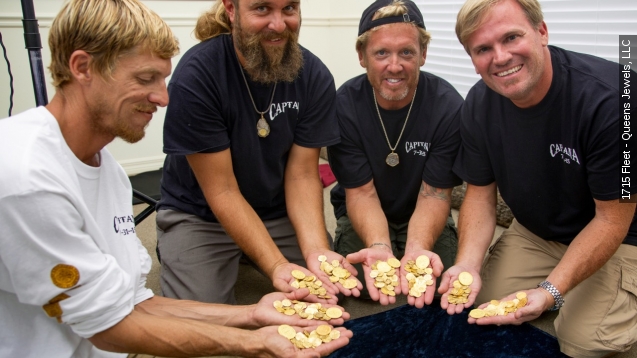 You can't quite understand what he's saying in the video, but you'd probably be pretty excited too if you found $4.5 million in gold coins from a centuries-old shipwreck.

In July, Brent Brisben and his team at 1715 Fleet - Queens Jewels, LLC recovered 350 gold coins in shallow water off Florida's east coast. The name of his company is actually taken from the Spanish shipwreck that put the coins there in the first place.

300 years ago, a hurricane destroyed a Spanish fleet of 11 galleons headed for Spain from Cuba. The ships had hundreds of gold coins on board, including nine "Royals," which were specifically made for Philip V, then king of Spain. The Royals are priced at $300,000 apiece.

On the 300th anniversary of the shipwreck, Brisben and his team recovered the coins and underwater excitement ensued.

Finding the lost coins is one thing, but divvying up the spoils is another matter. "Basically, the way the law works, these shipwrecks are governed by the United State's district court for the southern district of Florida. ... When we find these artifacts, we have contractual obligations to the state of Florida, which entitles them to up to 20 percent of the artifacts we recover," Brisben told CBS.

Luckily for Brisben and his team of four, including himself, the rest of the treasure is all theirs. In fact, even the treasure they don't find themselves is kind of theirs too, seeing that they have exclusive salvage rights to the artifacts.

So the Schmitt family that found $1 million in gold and other artifacts in July from that same shipwreck have to split their bounty with the state of Florida and Brisben's company. (Video via Florida Today)

Brisben and others found around $5 million in artifacts from the Spanish shipwreck in July alone and he believes there's still plenty more to recover.

"We estimate that there's another $400 million still left out there," Brisben said.

This video includes video from TBS/TBS-Vision and images from 1715 Fleet - Queens Jewels, LLC.