Florida's Zika Problem Could Be Much Bigger Than The Numbers Suggest 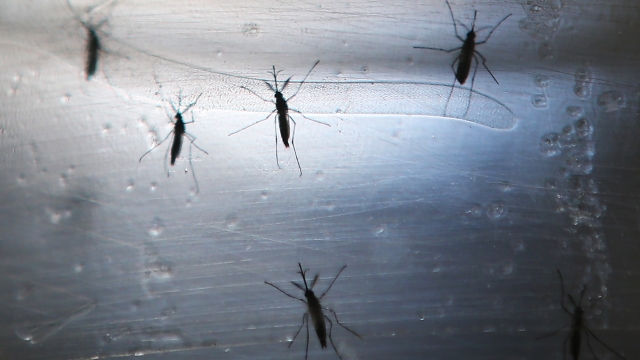 SMS
Florida's Zika Problem Could Be Much Bigger Than The Numbers Suggest
By Grant Suneson
By Grant Suneson
August 1, 2016
Florida announced a second wave of Zika cases from local mosquitoes. Ten more cases have been confirmed after the first four were announced Friday.
SHOW TRANSCRIPT

Public health officials are scrambling to stop the spread of the Zika virus now that infected mosquitoes have likely made it to the U.S.

The Centers for Disease Control and Prevention issued a travel warning for Wynwood, Florida, just north of Miami, after 10 more people contracted Zika, likely from mosquito bites in the U.S.

On Friday, Gov. Rick Scott announced Florida was the first state where Zika was spread locally by infected mosquitoes. The CDC now suspects at least 14 people contracted the virus in the U.S., but the real number could be much higher.

SEE MORE: The First Cases Of Locally Transmitted Zika Are Confirmed In Florida

There are likely many more people infected because 4 out of 5 people with Zika don't show any symptoms. The virus can cause fever, aching muscles and joints and red eyes.

Mosquito control efforts are reportedly struggling. The CDC said mosquitoes in the area might be growing resistant to pesticides.

Scott asked the CDC to send an emergency response team to the affected area to help study and contain the spread of the virus. For now, local crews are spraying the area to reduce the mosquito population.

Due to Zika-related risks of birth defects, officials recommend any pregnant woman who was in that area any time after June 15 should get tested. Anyone who visited the area is advised to wait at least eight weeks before trying to conceive a child.

This video includes clips from Centers for Disease Control and Prevention, USA Today and WKMG and images from Getty Images. Music provided courtesy of APM Music.