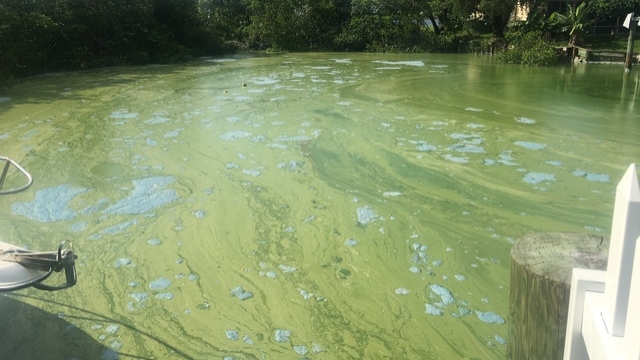 SMS
Florida's Waters Are Dripping With Disgusting Algae, And It Smells
By Melissa Prax
By Melissa Prax
July 1, 2016
Four counties in southern Florida are under a state of emergency as blue-green algae has spread through the area's bodies of water.
SHOW TRANSCRIPT

This blue-green algae spreading through Florida's waters may look pretty at first glance. But up close, it's actually "guacamole-thick" and smelly.

And it caused Florida Gov. Rick Scott to declare four of the state's southern counties under a state of emergency on Wednesday and Thursday.

Residents nearby are reportedly experiencing allergy symptoms, like rashes and coughs. The algae blooms can also be fatal for local wildlife.

TC Palm reports a June sample from one of the affected bodies of water — Lake Okeechobee — showed the water had more than 20 times the toxin level the World Health Organization considers hazardous.

The U.S. Army Corps of Engineers and the federal government are taking heat for the blooms; they control water flows in the area to keep lake-levels at a certain height.

Part of that flow is a decades-old dike that Scott says is close to failing, and he's blaming Washington.

"When you try to reverse 75 years of diking and draining, that takes time," Florida Sen. Bill Nelson said.

On Friday, the corps tried to reduce the flow from Lake Okeechobee by beginning a "pulse release" — or a slow weeklong release of water.

"Our water managers have dealt with such large quantities of rain and runoff entering the lake that it would cover the entire state of Delaware in 2 feet of water. However, after visiting with local elected officials in Martin County yesterday and viewing the algae first hand, we felt compelled to take action, even though we need to remain vigilant in managing the level of Lake Okeechobee," said Col. Jason Kirk, of the U.S. Army Corps of Engineers Jacksonville District.

Bacteria is also spreading on some of Florida's Panhandle beaches, but that problem is unrelated to the algae.

This video includes clips from WPTV and images from Getty Images and WPTV / Kaan Pala.