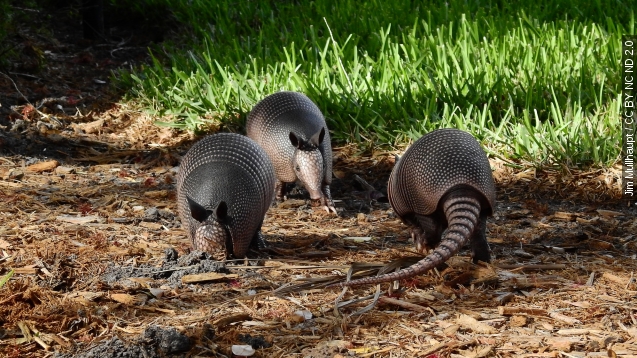 SMS
Florida's 9 Leprosy Cases Linked To Armadillos
By Christian Bryant
By Christian Bryant
July 21, 2015
After nine cases of leprosy were reported in Florida, residents were advised to avoid armadillos because they carry the disease.
SHOW TRANSCRIPT

The Centers for Disease Control and Prevention is telling Floridians to avoid armadillos after a rise in leprosy cases.

According to local outlets, nine cases have been reported so far this year. That's nearly Florida's annual average, within just seven months. (Video via Jim Mullhaupt / CC BY NC ND 2.0)

"What's happened this year is not necessarily concerning, but what is interesting is those cases involved people who were in direct contact with armadillos," Dr. Sunil Joshi told WFOX.

The CDC says some armadillos are "naturally infected" with leprosy, also known as Hansen's disease. It's a bacterial infection that can affect the nerves and damage the skin.

"Armadillos carry it and never show any symptoms. But if a human handles it, it can be transferred to humans," Ron Magill told WFOR.

To make matters worse, it's breeding season for armadillos, and Floridians could see more of them than usual.

Despite the high number of cases this year, the risk of contracting leprosy from an armadillo is still low. The CDC says the disease is treatable, and experts advise people to immediately wash their hands if they come into contact with an armadillo. (Video via Granger Meador / CC BY NC 2.0)