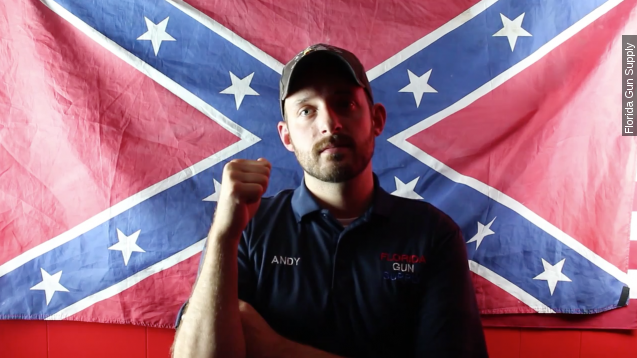 SMS
Florida Gun Store Owner Declares His Business 'Muslim-Free'
By Jake Godin
By Jake Godin
July 21, 2015
Florida Gun Supply in Inverness, Florida, has declared its store is a "Muslim-free zone" in response to the shooting in Chattanooga, Tennessee.
SHOW TRANSCRIPT

"I believe that the vast majority of Muslims are not out to kill us," Hallinan told WFTS.

Hallinan defends the Confederate flag in his video and claims U.S. leaders are attempting to divide the nation into North and South.

He also says, as a part of his duty to protect his fellow patriots, the shooting range and concealed carry classes are free and open to the public — with the exception of Muslims presumably. (Video via Florida Gun Supply)

The Council on American-Islamic Relations says Hallinan's new rule violates federal law, and it has contacted the Department of Justice.

"I invite Andy, the gun shop owner, to break bread with us, to get to know us as his fellow Americans. As neighbors. ... And I think he should get to know us, and not let fear and hatred divide us as Americans," Florida's Council on American-Islamic Relations executive director Hassan Shibly told WFTS.

Hallinan's not the first to try this, of course.

In 2014, an Arkansas-based gun range declared its business a "Muslim-free zone" as well. The Washington Post noted earlier this year, despite at least one anti-discrimination legal challenge, it's still "Muslim-free." (Video via KARK)