Florida Faces A Big Climate Threat, But Most Candidates Won't Say That 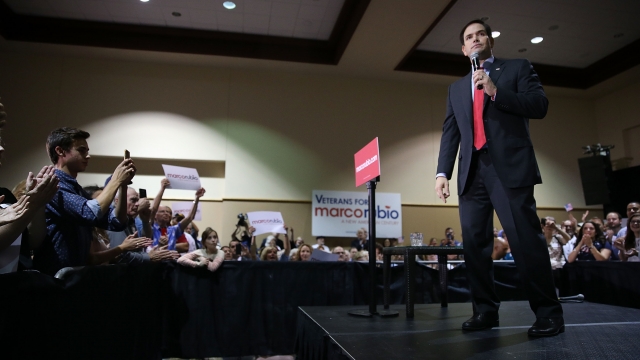 SMS
Florida Faces A Big Climate Threat, But Most Candidates Won't Say That
By Kate Grumke
By Kate Grumke
March 10, 2016
Both parties held debates this week in south Florida, an area that's seeing some of the first effects of climate change in the U.S.
SHOW TRANSCRIPT

In the U.S., South Florida is likely to be one of the first regions to feel the real effects of climate change. South Florida is also the host of presidential debates for both parties this week.

It's an issue that came up at the Democratic debate in Miami.

"Stand up and tell the fossil-fuel industry that their profits are less significant than the long-term health of this planet," Sen. Bernie Sanders said.

"You can see already what's happening in Miami. ... This is clearly man-made and man-aggravated," Hillary Clinton said.

But on the Republican side, climate change has been far from the center of attention.

Of the remaining Republican presidential candidates, Ohio Gov. John Kasich is the only one who has said climate change is man-made and has called for some action on it.

Sens. Marco Rubio and Ted Cruz have both said climate change is real, although Cruz has since walked back that position.

"Satellite data show for the last 17 years there has been no significant recorded warming. None. ... It has changed into what is the perfect political pseudoscientific theory, which is climate change," Cruz said.

"There'll be little change here, it'll go up, it'll get a little cooler, it'll get a little warmer like it always has for millions of years. ... It's called weather. ... I've received many environmental awards. ... I believe strongly in clean water and clean air. ... I think it's a big scam for a lot of people to make a lot of money," Trump said.

Although the candidates aren't in agreement, scientists are: 97 percent of climate scientists agree global warming is caused by human behavior.