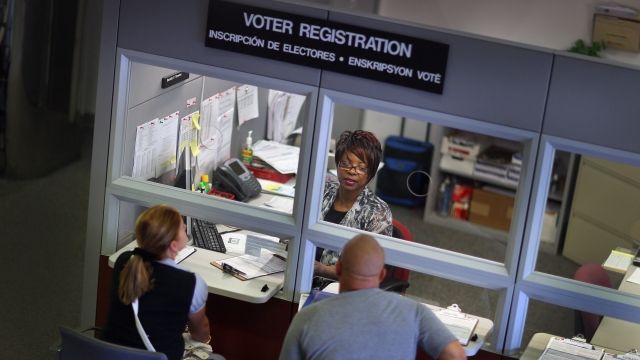 Florida residents will now have until Oct. 18 to register to vote in next month's election, thanks to a federal court.

Hurricane Matthew affected millions in the Sunshine State. Before the storm made landfall last week, the Clinton campaign asked for Florida's voter registration deadline to be extended.

"Our hope would be that a little bit more time will be given for people who were expecting to be able to get registered before the election," Robby Mook, Clinton's campaign manager, told reporters.

The original registration deadline in Florida was Oct. 11.

The Florida Democratic Party sued Gov. Rick Scott and the secretary of state after he refused to push back the deadline. Scott said residents had plenty of time to register before the hurricane.

A federal judge sided with the Democratic Party and ordered the one-week extension.

"Quite simply, it is wholly irrational in this instance for Florida to refuse to extend the voter registration deadline when the state already allows the governor to suspend or move the election date due to an unforeseen emergency," U.S. District Judge Mark Walker wrote in his order.

Of the five states affected by Hurricane Matthew, South Carolina was the only other one to extend its voter registration deadline because of the storm.